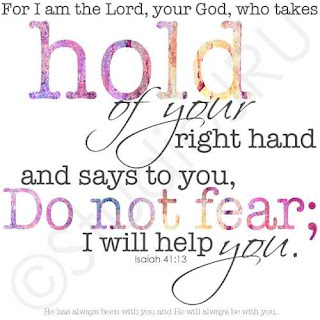 Websters Dictionary states that Fear is an unpleasant emotion caused by the belief that someone or something is dangerous, likely to cause pain, or a threat.

For about two weeks, the enemy was attacking me every way he could. physically and mentally.  I have never dealt with anything ever like this kind of fear before in my life.  I would lay awake in my bed at night clinching for dear life to my pillow shaking, thinking that something was standing over me, waiting for me to move and as soon as i did it was going to start attacking me.  I would look in the mirror while getting ready and i would see someone else besides myself, and i would just stare at what i was seeing in the mirror.  I couldn't tell you who or what it was that was staring back at me, but i do know, that it was the Devil trying to overcome me, and make me think that as long as i stayed in this program, he was going to be there, waiting for me to take a step forward.  As soon as i did, he would be there to drag me back 7 steps backwards.

Finally, one night I had enough, and sat all the girls down and i told them EVERYTHINGthat was going on.  I didn't know where to start or what to say, so i just poured it all out to them.  I felt like we needed to anoint our apartment.  One of the girls had some anointing oil, and we passed it around and grabbed hands and started praying together.  Then we split up and anointed every door post, window seal bedpost, door knob.  If there was something that we could anoint, we anointed it. We prayed for hours it felt like, it wasn't some minuscule prayer either.  God showed up in that apartment, and the holy ghost started moving.

I could see God working and moving in the girls while we were praying, but i couldn't feel anything.  I prayed and asked God why i couldn't feel him.  The enemy was in my ear telling me that God didn't hear me and that when i prayed i was wasting my breath because God wanted nothing to do with me.  I started believing the enemy and was contemplating of packing my things up and going home, because when i was at home i didn't deal with anything like this.  The devil would tell me that if i just went home he would leave me alone and i wouldn't have to deal with him anymore.

As soon as he said that, i knew that i was where i was supposed to be, and the Assistant Pastor at my old church told me to look up; 2 Corinthians 10: 4-5: "For the weapons of our warfare are not carnal, but mighty through God to the pulling down of strongholds; casting down imaginations, and every high thing that exalts itself against the knowledge of God, and bringing into captivity every thought to the obedience of Christ."

Once i read this, God just begin to pour scripture into my spirit, and a peaceful spirit just settled in my room, and that night was probably one of the best nights of sleep that i have had in a very long time.  Now every time that the enemy begins to stick his head back into my business, i just start quoting the scriptures God gave me.

Joshua 1:9- "Have i not commanded you?  Be strong and courageous! Do not tremble or be dismayed, for the Lord you God is with you wherever you go."