A Realistic Look At the Body (Revisited)

I was sitting here thinking tonight, and the following post that I wrote, (ironically, 2 years ago this week) and I felt it needed to be shared again.

A Realistic Look At The Body 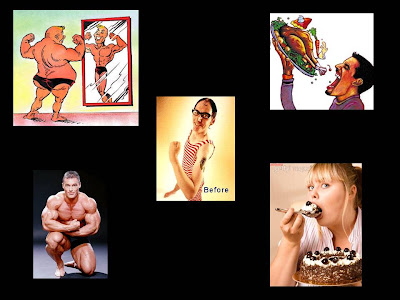 I came in this morning and was fighting a headache and was trying to deal with it while simultaneously get my head together for the day ahead and for church service tonight. I was feeling uneasy and troubled in my spirit and I asked the Lord to show me what he wanted to, and I laid my head back on the couch and waited. In just a few minutes I saw several image similar to those which I have put in the picture I created that you see here on this blog.

As I saw these images, the Holy Spirit spoke to me saying, this is the condition of the Body of Christ. The first image I saw was like that of the old Charles Atlas advertisements of the 90 pound weakling. The Lord spoke to me and said, "My church should be full of power, but it is weak and anemic, having not received the meat of the Word nor having exercised and prepared herself for battle. I then saw the image of the very out of shape man looking into a mirror but seeing an image of a fit, muscular body. The impression or perception was that of one who is fit, but the reality was vastly different. The Lord spoke to me and said that many have a self-perception that they are strong and fit, but they are deceived. They are ill-prepared, not fit for battle but they cannot be convinced how out of shape they are because they see themselves as being leaders when in fact they are spiritually flabby, weak and out of shape.

The next image I saw was that of a muscular body builder posing as one would in a competition. The Holy Spirit spoke clearly to me, saying that many have "built themselves up" but it is "for themselves." They are great posers, put on a good show, but they do only for themselves. He spoke clearly that there are those who appear to be strong leaders, but they do so only for what they can get. They consider themselves to be a backbone, strong spiritual leaders, but they are full of selfishness, doing what they do for what they get out of it and the attention they receive, not for what they can do for the body. The Holy Spirit spoke so clearly saying that their prayers fall unanswered and they are powerless because their reward is their attention which they seek. I then saw an image of one sitting at a feast and getting fat while there were others sitting around them starving. And the Lord said, "they are not concerned with the body, only for themselves. They take, but never give. They neglect the time of corporate worship thinking that they are above that and have no need. They feed themselves while others are dying." I immediately thought of Hebrews 10:24-25 "And let us consider how we may spur one another on toward love and good deeds. Let us not give up meeting together, as some are in the habit of doing, but let us encourage one another—and all the more as you see the Day approaching."
I thought about the countless times people have told me that they "get more out of prayer meeting than they do worship service." I thought about those who only come for the singing and worship, but leave before the preaching of the Word. I believe God is speaking a strong word to His church!

The Lord showed me an image of someone sitting at a table filled with pies and cakes. And the Holy Spirit said to me "there are many who seek the sweet things, but are not willing to eat the meat. They want the shout, they want the dance, they want the so called worship, but they will not submit themselves to the teaching of the Word. He then said a Word that was very disturbing to me. He said, "My church is full of revelers without discipline."
I had to think on that one and even looked up the definition of the word "revel." The dictionary says: " to make merry, enjoy pleasure often with music, song and dance." I believe what God is saying is that people are reveling in the music, dance and so on, but it is not about worship, it is about self enjoyment. When the music and dance is gone, so are they. Many come to church and enjoy the music and dance, but their life is not changed. If the life is not changed, then it cannot be worship, it is a party. There must be discipline... for that's what discipleship is all about!

No wonder prayers are ineffectual because people are full of self, and they walk in disobedience. Families are being ravaged because they love the worship music, but they are not in the Word. Reveling is where self is gratified. Our needs, our desires, we feel good.
The Body has misunderstood worship. It is not about what you "get", it is what you give! It is not about being blessed, it is about blessing God. Worship is giving to God!
People like to shout. They like to dance. They like to be loud, but they have not disciplined themselves to receive the meat... they want the sweet things! They have been seduced.

God is calling His church to a time of discipline. A time of denying self and what we want, and to receiving what God has to give us, for He knows what we have need of!
Posted by Darrell at Wednesday, February 10, 2010