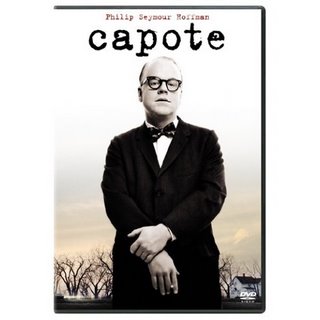 After much anticipation, Holly and I finally set down long enough to watch Capote last night. I have to say first and foremost, the film was great! If you are not in any way attached to Capote, ie love of literature, love of people with really weird voices, etc., then you may find the film a little "weird" or even slow. The film tells the story of Truman's interaction with Holcomb, Kansas that would later become his novel "In Cold Blood." There were several themes that one has to wrestle with in watching this film. First of all, Truman gets in way over his head in attempting to tell the stories of the murderers (In Cold Blood is the story of two guys that murder a family of four in Holcomb). In essence, he uses the guys to get the story that he needs to write his historical novel. What he is unprepared for are the bonds that he builds with both the murderers and the families in Holcomb. This aspect of the film is all to real. How many times do we use people to get what we want? We often justify it with "well, this is going to be the greatest book ever written. They are going to die anyway, so why not get their story..." and the list goes on and on. We are inherently selfish creatures. We must, however, learn to live a life that is welcoming and accepting of each "other" that we encounter. Each person has a story, even the person on death row, and if we listen long enough, we just might hear echoes of our own stories in theirs. This is precisely what happens to Capote. He connects with the murderer because their stories are so similar. He even states, "It's as if we were raised in the same house. He happened to go out the back door and I went out the front." The film closes with his quote, "there are more tears shed over answered prayers then unanswered prayers." The quest to write the perfect novel ended up costing Capote his life. The people that knew him, said that he was never the same after the events of Holcomb. His answered prayer turned out to be the beginning of the end for Capote. What was the answered prayer? Watch the movie.