From the Heart of a Child

ourCOG September 10, 2011 6:39 pm Uncategorized 0
While taking a shower the other day, my oldest son went outside without me knowing about it.  When I had gotten dressed I went to look for him because I realized he wasn't in the house.  I assumed he would be riding his skateboard on the carport like he usually does or either his bike.  When I went to the door, he was balling up a piece of paper that he had written something on and was very discouraged.  I said "What is wrong Jeremiah?" and he said "NOBODY STOPPED!"  I said "Stopped for what?" and he said "I was trying to sell drink to people that ride by that are thirsty, the world is full of thirsty people and nobody stopped!"

My heart immediately broke for him as I realized all the effort he had went through to accomplish what he had set out to do, all for it to fail right before his little eyes.  On his paper he wrote "Diet Mt. Dew $5 a cup", which I agree is rather expensive.  I said "Why were you trying to raise money?" and he said "I was trying to sell enough drink to buy us a car".  I get emotional every time I think about this, because he was so discouraged, but even more so because I realize he has such a big heart and at the same time is so tender-hearted as well.  His intentions were to raise money, but in his mind he thought he would also be helping someone else with their need.  Here is a picture of his little project. 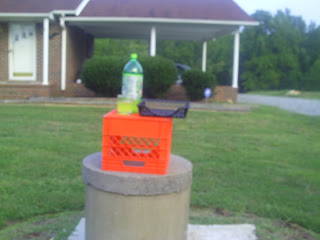 As I thought about this incident, I also thought of how Jesus has already paid the price for our salvation. He is standing there waiting at the well, to give living water to the thirsty so they will never thirst again﻿, but so many people ride by and don't even acknowledge Him.
John 4:13-14(NKJV)  "Whoever drinks of this water will thirst again, but whoever drinks of the water that I shall give him will never thirst.  But the water that I shall give him will become in him a fountain of water springing up into everlasting life."