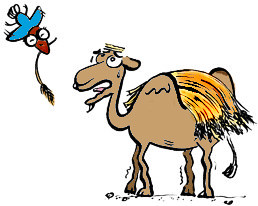 Every day I deal with it. Life, that is. It seems to come at us from all sides, doesn't it? If it isn't the rent money being gone, it's the car breaking down. Life always seems to randomly toss out blows like a blind boxer. I remember several months back, as I was driving into Lakeland from Davenport, the van suddenly died on me. There I was, in the middle lane of I-4, in morning rush hour traffic. I had cars and a couple semi trucks surrounding me. I managed to coast the van over and stopped just about halfway to town. With 3 of the kids with me, I called my wife, and then called Pastor Johnny for a ride. Then I called the insurance company to arrange a tow. Finally, very late, I got the kids to class, and I got started on my day. It was indeed a frustrating time.

Yet, through it all I didn't lose my cool. I managed to stay calm, even after hearing the price for repair (well over $1400). The funny thing is, I can have something huge like that hit me, and I cope. Yet, when something small happens, I can go off the deep end. I can manage the car repair, but don't you dare spill the apple juice! To my shame, I've let too many juice and milk incidents rob my peace as I blew up at the offender, only to feel like a pile of poop. (Good thing my kids are resilient.) In reality, the problem I had was letting life's blows chip away and sweeping the frustrations under the rug, thinking I'd dealt with it. The small juice spills and artwork on the wall was simply the straw the broke the camel's back.

As I read through the book of 1 Samuel the other day, I came across a familiar story for any serious Bible student. That would be the encounter David had with a man called Nabal. This guy was one rich homeboy. He apparently had quite a spread. He had dozens of servants, and shepherds tending to his flocks and herds. He also had good taste in women, because the Bible says his wife, Abigail, was a knockout. She had brains on top of beauty, too. (Funny how so many ladies who could have the best fish in the sea end up with bottom-feeders-just continue reading!) David had his men, some 600 guys with him. They saw this man's flocks and shepherds, and when they could have picked the shepherds off and ate the sheep, they protected them. The shepherds themselves testified that David's men were a wall around them. So, with a feast approaching, David sent to ask Nabal (whose name means "foolish"-just an FYI) if he could spare from his immensely huge supply of goods for he and his people. David was met with scorn and vitriol from Nabal. "Nabal answered David's servants, 'Who is this David? Who is this son of Jesse? Many servants are breaking away from their masters these days. Why should I take my bread and water, and the meat I have slaughtered for my shearers, and give it to men coming from who knows where?'" What a guy, eh? Who cares if your possessions were protected because of this guy David. What happened next was really a little piece of straw busting the camel's back. David had a conniption over Nabal's response. He commanded his men to strap on their swords, and off they went to utterly obliterate all belonging to Nabal. Only when the foolish man's servant saw what was coming did God intervene by sending Nabal's smart wife to pacify David. He relented, and soon God took care of Nabal.

The funny thing to me is that while David exploded over the Nabal thing, he was literally on the run from the king of Israel, Saul. He was being hunted down like a deer in the woods, Saul trying desperately to kill David out of his raging jealousy. David spent years running, sleeping in caves, and hiding out with the Philistines and Moabites for protection. If anything should have pushed him over the edge, it should have been that. But when Saul's murderous intentions failed to set him off, it was Nabal's petty insult that did.

David was a man who knew the comfort of God. God was gracious and merciful to him while he was on the run. More than a few times, God kept Saul from reaching David. And even while running, David knew to praise and worship his Creator, who was keeping him. In fact, the heading of Psalm 57, one of David's psalms, tells that he was hiding in a cave from the raging king. In that psalm David praises the One who alone could save him, even while danger was hunting him down. "Have mercy on me, O God, have mercy on me, for in you my soul takes refuge. I will take refuge in the shadow of your wings until the disaster has passed." (vs. 1). I cry out to God Most High, to God, who fulfills {his purpose} for me. He sends from heaven and saves me, rebuking those who hotly pursue me; Selah God sends his love and his faithfulness." (vs. 2-3)

Did you notice that odd word in the third verse? Selah. It means to stop and think. Take in what you just read. David apparently did not do a "selah" in this situation. He knew the One had his back. And even then, he let something small drive him over the edge. Man, how many times have I been guilty of that? I know the Lord has my good in mind. Yet, when it comes down to it, it's so easy to forget and freak out and sweat the small stuff.

What's on your back today? Ask the Lord to help you with it, because tomorrow it'll be something different. It may be a lot smaller, but it could be the straw that broke the camel's back. Don't let the little things get you. But give the big things to the Lord who sees you through. Believe me, friends, it adds up.