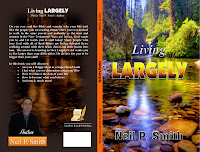 During the Fall of 2010 I began to seek the Lord for direction for the upcoming New Year. This is something I do every year, nothing new, just a process I've come to appreciate. As I listened for the voice of the Lord I heard the Holy Spirit speak two words into my spirit: "Live Largely!"
That sounded strange as I considered the position our world is now in, financial crisis, wars and catastrophic events taking place...how could I tell people who can't afford to fill their gas tanks to live largely? It wasn't so much that God was asking me to preach a message of financial prosperity, though I firmly believe that God will bless and prosper our giving...it was that God was asking me to tell people to stretch from the inside out! Beginning the first Sunday of January I began to teach through the 54th chapter of Isaiah, week after week, line after line, I challenged my congregation to get out of the box, and to live largely.
It then became my turn, I was challenged to turn this series of messages into a book. So I sat down and began to write, it seemed that my laptop was attached to my lap, and my fingers were on fire.
The fruit of this simple word from the Lord is a new book that will soon be released. I believe that you and I can live largely, that we can experience abundant life...today! It's not a life without struggle, nor does it ensure finances beyond your wildest dreams. What living largely does promise is the release of who and what God has always intended for you to be...it challenges you to dream big, to see God in a huge way and to see your life expanded!
I hope you'll check it out!