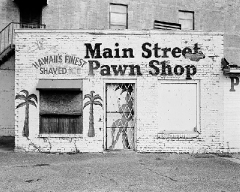 "He provided redemption for His people."
Psalm 111:9 NIV
I have always loved going to pawn shops. I’ve found some great deals and hidden treasures in them. I have in my possession a set of original photographs of each of the 1967 Saint Louis Cardinals that I purchased in one in  years ago for $5. In that same shop I bought a high speed cassette tape duplicator for $10. The owner of the shop did not even know what it was. Over the years I have had the habit of popping into pawn shops in various towns as I travel to see what kind of treasures I might find.


Have you ever been to one? I was talking to someone a few days ago who had never been and really did not even know what a pawn shop was. The idea of a pawn shop is simple; if you need money, you take a valuable item like jewelry or a musical instrument to the shop where the pawnbroker appraises it and gives you cash. (Usually far beneath the value of your item that you are pawning.) You have so many days to return and buy back your item, but if you don't return within the specified time to redeem the item, you forfeit ownership. In other words, even though it was yours, you no longer have legal possession until you pay the price to get it back, and if you wait too long, it can be lost forever.

I am reminded of a time, a little over 15 years ago when my wife was in the hospital giving birth to our daughter. While we were away, someone broke into our house and stole a lot of our possessions, including my wife’s jewelry. Months later, while traveling to see family in southern , I popped into a pawn shop and there I recognized two of my wife’s rings. One I had purchased for her shortly after we were married and the other her parents had made for her while we were in high school. They were distinct and I knew these were her rings. I phoned her and had her come to the pawn shop where she tried them on, and they were a perfect fit. We knew these were her rings, but the owner of the pawn shop had papers where he had purchased them in , so he was now the owner. He had legal ownership of them. The only way we could get them back was to purchase them, which we did, restoring them back to the rightful owner.

Thinking about all this today, I began to see a parallel to our lives.
If you will, we have all been “pawned” because of sin and we are in need of someone to buy us back, or redeem us, so that we are in the hands of the rightful owner. Have you ever thought of yourself as somebody who needs to be redeemed, so you can be returned to your rightful owner? The Bible says God created us to fellowship with Him. But because of sin, we have all fallen into “the trap of the devil, who has taken them captive to do his will.”(2 Timothy 2:26) You see, the only way it is possible for us to be restored to God, Our rightful owner, is through redemption. (Another word we toss around in Christian circles, meaning: “to recover ownership by paying a specified sum” or “to turn in something (such as coupons) and receive something else in exchange.”)
That's exactly what God did! "God so loved the world, that He gave His only begotten Son, that whoever believes in Him should not perish, but have everlasting life" (John NKJV). Christ's death on the cross was the price of your redemption; that's how much God values you! He has already redeemed you!

But here’s the key: Our redemption is already paid for in full, but redemption only becomes a reality when you realize that you're a sinner and need a savior, and trust in Christ as your Savior. The moment you do, He reunites you with your Heavenly Father - ransomed, redeemed, restored to your original owner. The problem is, most have grown so accustomed to living in the pawn shop of life that we don’t realize that we are living there, far beneath our privilege, and being owned and controlled by someone who has ripped us off.
So the question is: have you taken God up on His offer of salvation, the one that makes you a member of His family? You were created to live in the King’s palace, walking in fellowship God, but because of sin, we have all been “pawned.” The Good News is that your redemption price has already been paid, and if you're able to read this, it's not too late to break free of the bondage you’ve been held by, and begin to experience the fullness of life that you were created to enjoy. You can do it right now wherever you are. Simply recognize that you (all of us) are a sinner and need a savior and accept Jesus as your redeemer and accept his blood as payment in full for your freedom.