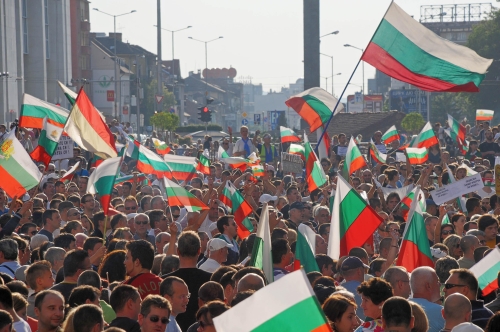 EVERY day, for the last twelve days, at exactly 6:30pm, Independence Square, a busy intersection in the center of Sofia, has been the starting point for a protest march that passes by the parliament building, the so-called Eagle’s bridge and the National Palace of Culture. Around 10,000 people participate every evening. They are calling for more transparency, less corruption and an end of the local oligarchs’ rule.

Only three weeks into the job, the new Bulgarian government is facing the fate of the old one. Large-scale protests are being held daily not only in Sofia but other major cities too just four months after demonstrations forced the previous conservative administration to resign. The protests were sparked by a string of dodgy appointments by the new government. The most controversial was the nomination of the Bulgarian Kim Dotcom, Delyan Peevski, a 32-year-old media mogul, as head of the powerful national security agency. A member of DPS, the ethnic Turkish party, the junior coalition partner in the Socialist-led government, Mr Peevski controls a media empire of numerous high-circulation newspapers, popular TV channels and news websites all of which tend to change allegiance according to who is in power. Mr Peevski’s political résumé is equally questionable: after spending two years as a deputy minister in a previous Socialist-led government, he was fired in 2007 and prosecuted on extortion and corruption charges. (He was eventually cleared.)

“My trust in this government is gone after this appointment,” said Rosen Plevneliev, the president, who questioned Mr Peevski’s “reputation and competence”. As the protests gathered speed, Mr Oresharski admitted the appointment was a mistake and parliament reversed the decision.

But the U-turn failed to appease the protesters. They are now demanding the resignation of the whole government as well as changes in the electoral law to allow smaller parties to enter parliament. Unlike the demonstrations earlier this year, the current rallies are largely peaceful. More and more members of the middle class are joining the protests, including popular actors, writers and musicians as well as families with babies and strollers.

“We feel that nobody is steering the boat,” says Mihail Vuzharov, one of the protestors who is a marketing specialist at a medical IT startup. “In fact, the boat has been sinking for decades.” Therefore, adds Justine Toms, a business-development manager in Sofia, “we are protesting against the people who should be in jail and are instead appointed at high posts in the state.” Most Bulgarians tend to agree with Mr Vuzharov and Ms Toms: over 80% say they support the protests, according to a poll by Alpha research. Today sixty prominent intellectuals, lawyers, journalists and human rights activists posted online a “charter for disbanding the plutocratic model of the Bulgarian state” calling for genuine democracy and the rule of law .

The wide backing by Bulgaria’s society (the educated elite in particular) makes the situation extremely tough for the government according to Tihomir Bezlov, political analyst with the Center for the Study of Democracy in Sofia. Most analysts agree that it won’t be able to serve its full four year term. In fact, the odds were against the government of Mr Oresharski from the very beginning. The Socialist party was able to form a cabinet only because GERB, the ex-ruling party of Boiko Borisov which won the May 12th snap elections, was unable to muster a parliamentary majority. With only half of the votes in parliament, the Socialists and their partners from DPS were left reliant on the unpredictable, ultra-nationalist Ataka party.

After twelve days of protests and with new ones planned for the coming weeks, the risk of yet another early election is increasing. Demonstrators will continue to gather at Independence Square every evening…