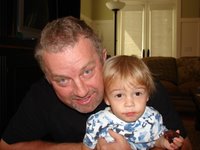 Our family vacation this year was a delightful time. My parents and Kathy's mom were able to join us again and of course, the boys, their wives and Cooper David were there. The WAR on the SHORE was the result of four days of our golfing but the end result was Jeremy and I kicked some serious &*^%$# and retained our title. In singles, Jason "almost" beat me for the week, but didn't. He's getting close and I'll need to sharpen my game some as the years go.

Of course, Cooper David was the star of the week and with Branson Christopher coming, we know his little world is going to be ROCKED!!!! He talks to Kathy and me on the phone at night sometimes and though he just jabbers, it is music to my ears. Dr. Donald Walker, one of our former state overseers used to say that "grandchildren are God's reward for not killing your own!" I don't know about that but I sure do enjoy grandfathering!