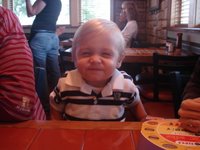 While Jeremy and Corrie attended their state ministers meeting Monday and Tuesday, Cooper David invaded our home. What a treat! We had a blast and were so happy to have him in our home. By the way, if you need to know anything about Baby Einstein CDs, give Kathy or me a call...we have them memorized. HA! Cooper is talking so much now and he loves communicating with adults. My favorite is to say --"raise those hands and say Hallelujah!" to which he will drop his chin and growl--"allejuah!!!" or something similar.

When ever the phone rings, he says "Jason?" Sounds like his uncle calls a lot!

BTW, he knows all 14 of the articles of the Declaration of Faith...what a boy!