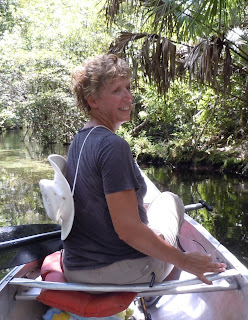 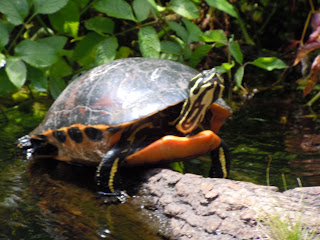 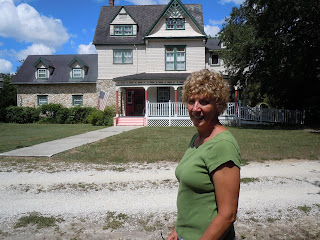 On occasion I have to travel on a Sunday; I don’t like it. I want to be in church on Sunday. I of course get ill and miss from time to time. I admit there has been a couple of times when I was traveling that I could have gone but found it difficult to find a church on a Sunday morning and so I just missed. Yesterday, Cheryl and I chose to do the Juniper Run instead of finding a church.


The Juniper Run is not a run; it is a seven mile canoe trip that begins at Juniper Springs in the Ocala National Forrest. I have known Cheryl for 37 years next month and for all that time I have watched the glow on her face when she talked about Juniper Springs. It was the most magical place of her childhood. Her father had been a CCC boy in the 1930’s and had worked on the Deleon Springs near Deland. In the early to mid 60’s he took his family camping at Juniper Springs. The CCC boys had developed this site as well. The main spring feeds into a huge pool that I would guess to be 30 to 40 yards in diameter. The water is 72 degrees year round; jump in and you will swear (or affirm if you’re still a holiness person) it is 32. In various places in the park you will see water bubbling up through limestone forming a crystal clear blue pool over white sand.


The stream begins at the large pool and meanders through the forest slowly gaining breadth, depth and force as other springs feed into it. The run is an obstacle course shaped by the processes of nature. For most of the seven miles the creek is ten to 15 feet wide and shallow enough to use the paddle as a push-pole. Sandbars appear frequently. Cyprus stumps lurk beneath, unseen until they nearly capsize your miniature Titanic. The greatest challenges are downed trees. Many lay across the path a couple of feet above the water from bank to bank; duck or take a swim with the gators. Others rest below competing with the stumps for most capsizes in a day. It is a challenge to maneuver through these sundry obstacles. Most of the people we met on the run flipped their boat at least once. We didn’t.


When we entered the park and inquired about the run the ranger warned “You will get wet and it will test your marriage.” She was wrong on both counts. We worked well as a team with only a couple of exceptions.

We didn’t see much wild life, just a few birds, lots of fresh water mullet, one alligator, and a host of turtles. I took several pictures but only a few were worth keeping. If you ever take the trip don’t bother taking a camera, there is not a lot of opportunity to point and shoot.


There weren’t many people there yesterday. It’s too far off the interstate highways. Ours was the only out of state car tag in the lot. The camp grounds that were overflowing in Cheryl’s youth were all but empty, no electricity or onsite sewage are probably to blame.


While in the area we stayed at the Shamrock B&B, in Weirsdale. It is a good place to stay. The owners are Christians whose 14 year old daughter was run over and killed at her bus stop eight weeks ago. Please pray for the Overcash Family.