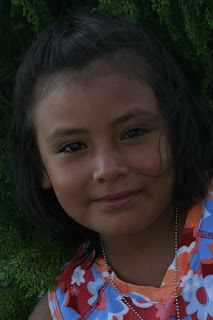 I want to introduce you to the newest addition to our family, her name is Vanesa. She is a beautiful 7 year old little girl who lives at the Casa Hogar Orphanage in Poza Rica, Mexico. We met her this past week when we visited the orphanage. Both she and her brother Angel have been living at there since February of this year without any sponsorship or monthly support. They come from extreme poverty, and the reason that they're at Casa Hogar is due to the fact that they interfered with lifestyle that their mother chose to live. In short, they were an extreme burden to their mother and found it difficult to get along with the different men that she shares a relationship with...at home they faced neglect from their mother and abuse from her partners. As I'm sure you can imagine, Vanesa is having a difficult time coping with the fact that her mom doesn't want her and that she has abandoned her and her brother. She is living in extreme denial and thinks that her mom is going to just come and pick her up at any time and take her back home...in fact, she told us that she may not be there by the time our group left.
She didn't smile when we met her, she didn't immediately run up and greet us or hug us, she wasn't affectionate at first, in fact, she was just sort of a loner who kind of stayed to herself...but in spite of all that she stole our hearts. She and Joyce connected almost instantaneously and it was like God had allowed our path to collide with hers in some sort of supernatural way. You see, I sort of went with the expectation that we would more than likely meet another child to sponsor, but little did I know what God had in store.
Before we left I told Joyce that I wanted her to have the opportunity to pick out the child that she wanted us to support since I had the opportunity to pick out the one that we had previously been sponsoring...and there was not a doubt or question in our mind...the whole thing was simply destiny, not just for her, but for us as well. We will now be able to give her love and support unlike she has probably ever experienced in her life. In fact, before we left to come home she was smiling and loving on us and we had already begun to see a tremendous change in her demeanor just in the short amount of time that we were able to spend with her. I'm so thankful and grateful to God that she now has a place to live and a covering like Casa Hogar to care for her and tend to her needs...because if it wasn't for that, who knows where she might be. Please keep Vanesa and Angel, along with all of the other children at Casa Hogar in your thoughts and in your prayers.
PS. Oh and by the way, Madison is totally stoked about the idea of having a sister from Mexico!

Iran (old name Persia) was once a world power in…