Sessions with the Master 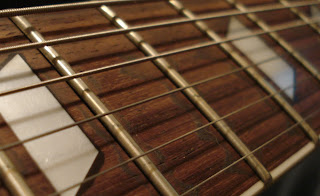 Every genre of music has its masters. You know, the ones who have truly mastered their instruments, be it the concert pianist, the guitar virtuoso, or even the opera singer, like Pavarotti. These people have spent literally years mastering their craft. Hours and hours daily are spent practicing, running scales up and down the strings or keys, till their fingers tire out. As a guitarist, I understand how taxing a good "workout" can be.

This morning, as I prepared to head to the office, I went to one of my favorite ministry message boards to see what my preacher friends had posted since I turned in for the night. One of them, another guitar player, said he was in the mood to play along with old BB King albums. He then asked who we enjoyed "jamming" with via a CD and a guitar. I mentioned my love of jamming with Stevie Ray Vaughn, the late Blues master. Another mentioned John Lee Hooker and Van Morrison. Why do we as adults want to do what we did as kids learning our craft, sitting alone in a room just playing along with people will never get the chance to play music with? Well, let me say, first of all, it's fun! I'll never tire of jamming along with my favorites. But, it also forces us to improve. Listening to a master only makes one want to become a master. I can't tell you how many times I've listened to Stevie Ray, or Eric Johnson (listening to him as I write!), and immediately had the drive to lock myself away and practice.

I think it works that way in most areas of life. When I see someone doing something I can do, but better, it doesn't really create any jealousy in me, but rather drives me to improve. Reading Max Lucado books drive me to become a better writer. I think it's the same spiritually. We would do well to surround ourselves with "masters of the faith". I've got several in my life, people who have walked this road much longer than I have, and have much more experience than I do. But, I've found that just like sitting in on a session with a master guitarist makes me better, so hanging out with a better Christian makes me a better Christian. One such man is a retired pastor from Michigan, living here in Lakeland. I call him Pastor G, and he serves our church. I've spent a good deal of time with Pastor G lately, just talking and picking his brain. Not only does he walk close to the Lord, but it pours out in his life. He lives for Jesus, and as such, he lives to touch those around him. And when I get time to hang with him, I get blessed, and I am driven all the more to let the Lord work in me.

Of course, Pastor G is a master in the faith to me, because he hangs with the Master, the Lord Jesus. He is a godly, praying man who longs to spend time in God's presence. And, like I said before, spending time in a master's presence drives you to become better. When I see the godly fruit flowing from believer's lives, it drives me close to the Lord who makes us all more like him. In fact, 2 Corinthians 3:18 says that when we spend time "reflecting His glory", we are actually being changed in His Image. We are becoming more like Jesus!

Back in ancient Israel, their greatest king ever, David, sat on his throne, surely reflecting back on his life. Certainly, he remembered the pasture he kept his dad's sheep in, and the lions and the bears that he took out when they came looking for lunch. He fondly remembered the day God used him to kill Goliath. He remembered the goodness of God, who protected him for years as he ran from jealous, murderous king Saul. And he remembered Jonathan, and the promise he had made to him. But something David said has really hit me hard. As he sat there, one of Saul's servants came to him, named Ziba. "Is there no one still left of the house of Saul to whom I can show God's kindness?" asked the king. Did you catch that? Those italics don't appear in the text, you know. He wanted to show God's kindness! God had been faithful and good to David. When he had nowhere to turn, he had the Lord. When he was living in caves and hiding in fields, he wasn't alone. The Lord was with him, providing and protecting him. David had been shown God's kindness his entire life. Now, it was his chance to show some of God's kindness. He found out about Jonathan's long lost son, Mephibosheth, and he was touched. He sent for him and brought him, a crippled young man, living in poverty, to come and live as "one of the king's sons". He poured out God's kindness on guy who lived his life in fear of being killed by him. After all, it was custom in those days to kill any potential heirs to the throne off, and Mephibosheth was the former king's grandson. Instead, he was shown grace and mercy. He was blessed abundantly, and "adopted" by the king. Why? Because David had so much kindness displayed to him by the Master, the Lord Himself!

I could talk about Peter, who witnessed the Lord Jesus' kindness to a little Gentile lady whose daughter was demon-possessed. He later showed kindness to a roomful of Gentiles, hated Romans at that, and saw them filled with the Holy Spirit. I could mention Stephen, who displayed the Lord's nature, and even His words, when he was being executed: "Lord, lay not this sin to their charge". Sounds a lot like "For they know not what they do", eh? When we spend time with our Master, we become more like Him. So, today, get alone with the Lord Jesus. You'll find his promise is true. Get in His presence, and He'll rub off on you!