Sometimes You Just Have to Laugh 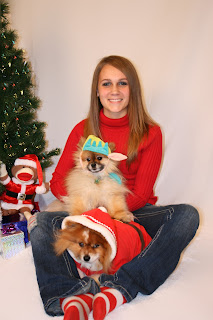 Our dogs, are Rowdy and Copper. Rowdy is the bigger one in Santa suit.  Rowdy is an avid eater, constantly wanting treats. He hates this Santa suit, and I had put him in it again tonight, and then asked him if he wanted a Milk Bone. Normally, Rowdy will do anything for a Milk Bone. I mean, he goes nuts. But this time he jumped up like he wanted one, but he would not go to the kitchen for it. He has never done this before, and I did not know if he was acting this way because he was in the suit, or what was going on. I ended up giving him the Milk Bone (Copper too) and he was then spry as usual. In fact, he started acting like the suit did not bother him at all. (He's been in it now for almost 3 hours, and he's kind of acting like he actually likes it now.) A little bit later, I was doing the dishes and he came into the kitchen, dancing around as he usually does, hoping for some scraps or a treat. All of a sudden I went to put something into the trash, and I discovered why Rowdy had been so reluctant to come into the kitchen. The trash bag was ripped to shreds where it hung over the outside of the trash can. Apparently, Rowdy had been trying to get into the trash to get some chicken scraps and bones but was unsuccessful in his attempt. Still, he was well aware he had done something wrong, and that must be why he was not willing to go to the kitchen. I guess he figured that once I'd been in there and there was not punishment that everything was going to be OK.  I really found that funny that a dog could reason things out enough to not want to go into the kitchen because he feared punishment, and then to reason that it was OK after I'd been in there for a few minutes and there was not repercussions coming.  By the way... I did not punish him at all. How can you punish for something that makes you laugh like that?


One thing that makes me chuckle about things like this is that when I was in college, I flunked Systematic Theology under one particular teacher because he and I got into a rather heated argument over his insistence that the difference between mankind and animals was that animals did not have the ability to reason. I lost that fight, as he had the power to fail me, but over and over again, the animals prove me right.