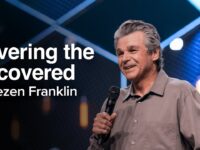 This is “Covering the Uncovered”. To hear more inspiring messages from Jentezen Franklin, visit http://jentezenfranklin.org/watch?cid=sm-yt & subscribe to this channel: http://goo.gl/yfkXHy Tell us more about what’s going on in your life: Let us pray with you: https://jentezenfranklin.org/contact?f=Prayer&?cid=sm-yt Share your testimony to encourage us and others: https:/... »

A lost city and vital port known as Heracleion to the ancient Greeks and Thonis to ancient Egyptians was thought to be nothing but a memory until a team from the European Institute for Underwater Archeology (IEASM) discovered the mystical city submerged in the Mediterranean Sea. Traces of Thonis-Heracleion were found four miles off the coast of Egypt, 30 feet below the Aboukir Bay in 2000. The tea... »