The Pack and The Pace Setter

Bill Isaacs, in the Forward Leadership Blog wrote a great piece, “Leaders, Listen up.”  In the entry, he makes a phenomenal point, “The banana that leaves the bunch is the first one peeled.”  Great insight. 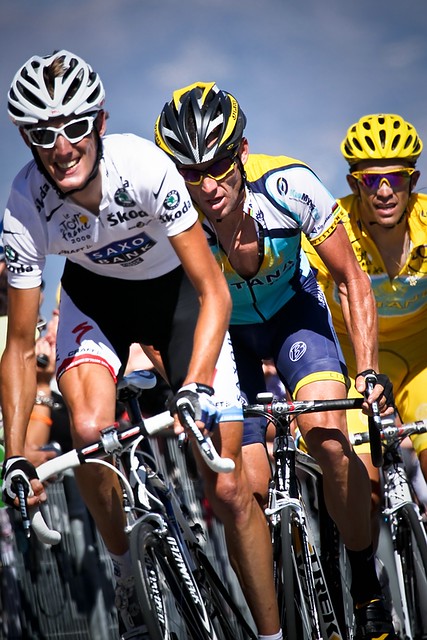 I love cycling. And, I couldn’t help relating Bill’s statement to what it takes to break from the pack to win the Tour de France.  Now, I’ve never ridden the Tour.  But, I do have 3,000 miles cycling under my belt this past year. And, I know what it feels like to ride alone and in the pack…it can be withering or it can be easy…depending on how you ride it.

While cycling in a peloton, you can actually ride on average 10+ mph faster than you can by yourself. Every stage of the Tour de France’s 21 stages and on multiple occasions, cyclists try to break from the pack/peloton. They may be out ahead for the whole day. But, they almost always get swallowed up by the peloton within a few miles of the finish line.

Alone, there are just too many factors working against you when you’re going solo: wind, discouragement, no rest, you’re the only pacemaker, etc… The result is that most stages are decided by a sprint in the last half mile. Still the sprinters are set up by their team mates who sling shot them across the last few hundred feet of the finish line. Crazy!

THE TIME TO MAKE A BREAK FOR IT AND GO SOLO

However, the place that the lone banana can break free is up a mountain. There is no benefit and almost all hazard to gain by staying in the peloton going up a steep mountain.

This is where the guys like Lance Armstrong, Alberto Contador, and Andy Schleck distinguish themselves. Going into the Pyrenees Mountains, these guys get up and out of their saddles and huff it up the mountain like warriors. These are the guys that finish well beyond the pack…sipping lemonade while everyone else is still out working up the mountain.

KNOW WHO CAN MAKE THE JUMP AND GO WITH THEM

When one of these guys make their break, you either jump out with them and battle. Or, you slink back into the pack and pace your way up the mountain.

PREMEDITATED REVOLT FROM THE PACK

Breaking from the pack happens strategically. It isn’t accidental. It isn’t easy. It changes the pace of everyone else. You need both. But, all of the roles working together makes the Tour a beautiful and challenging thing. Even the guys who break from the pack and don’t make it alter the speed of the pack.

FALLING OFF THE BACK OF THE PACK IS A TERRIBLE THING

The sad thing is when guys fall off the back of the pack. When that happens, they only ever rejoin the pack the next day. And, the remainder of their 100-150 miles of that day is a rough, lonely slog…if they even finish at all.

Hypothetical question/scenario: someone who has not been converted is murdered…