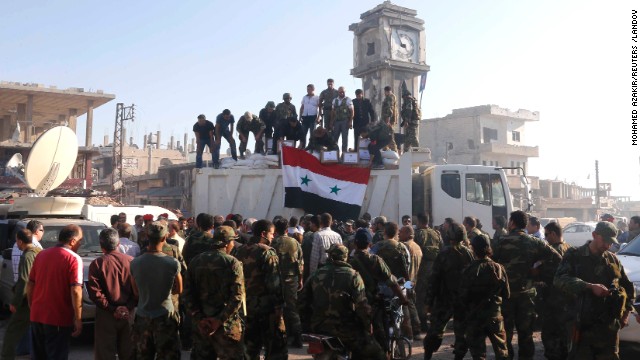 Jerusalem (CNN) — Obama administration officials confirm there will be White House meetings this week on Syria, where discussion of possibly sending lethal weapons to Syrian rebels will be on the agenda. The officials stressed no final decisions have been made, although they said President Barack Obama was inching closer to signing off on arming moderate rebel units that had been vetted. The White House meetings will also discuss a possible no-fly zone, although officials said that was less likely.

The interagency discussions come as Syrian President Bashar al-Assad has made gains against the opposition in the past few weeks,including capturing Qusayr, the embattled town near the border with Lebanon. Also, Hezbollah has become more active in the fighting on behalf of the Syrian regime. The opposition has warned the Obama administration that without immediate support, they could face crippling losses.

Secretary of State John Kerry postponed a trip this week to the Middle East to participate in the meetings, the officials said. “At the president’s direction, his national security team continues to consider all possible options that would accomplish our objectives of helping the Syrian opposition serve the essential needs of the Syrian people and hastening a political transition to a post-Assad Syria,” National Security Council spokeswoman Bernadette Meehan said. “We have prepared a wide range of options for the president’s consideration, and internal meetings to discuss the situation in Syria are routine,” she said. “The United States will continue to look for ways to strengthen the capabilities of the Syrian opposition, though we have no new announcements at this time.”

More than 70,000 Syrians — most of them civilians — have been killed in the two-year conflict, according to the United Nations.