Is your city “Bible-minded?” It’s an interesting question — especially in a day-and-age when faith in the public sphere, by many accounts, is under siege. Recently, the Barna Group and The American Bible Society set out to explore U.S. cities to determine how much people rely upon the Bible. Based on 42,855 interviews nationwide, including an exploration of Bible trends in 96 U.S. localities, the holy book’s place in contemporary society was assessed in detail.

Naturally, one wonders what, exactly, it means to be “Bible-minded.” After all, there are a plethora of indicators, with different people holding divergent ideas about how the book should be read and processed. Considering these differences, here’s how the analysis worked: People who said that they read their Bible in a typical week while also strongly noting their belief that the book is accurate in the sentiments it teaches qualify as “Bible-minded.” So, the measure is two-fold; it involves a mixture of action and adherence.

When it comes to the cities that revere the Bible most fervently, the South still corners the market. In the top ranking cities, as Barna notes, at least half of the populations qualify as “Bible-minded.” These cities include: Knoxville, Tenn. (52% of the population), Shreveport, La. (52%), Chattanooga, Tenn. (52%), Birmingham, Ala. (50%), and Jackson, Miss. (50%). Barna continues, providing more information about the cities that have the least Bible-minded residents:

The least Bible-oriented markets include a mix of regions, but tend to be from the New England area. Easily the lowest Bible-minded scores came from Providence, RI (9%) and Albany, NY (10%). To put this in perspective, the most Bible-minded markets are five times more likely to have residents who qualify as Bible-minded than is true in these two Northeastern cities.

Though these two cities are the most extreme, none of the cities in the bottom 10 break 20%, where even one in five people could be considered Bible-minded. The New England area is home to most of the markets in the bottom 10 Bible-minded cities, including Burlington, VT (16%), Portland, ME (16%), Hartford, CT (16%), Boston, MA (16%), Buffalo, NY (18%) and New York, NY (18%).
The remaining markets in the bottom 10 are primarily in the West and include San Francisco, CA (16%), Phoenix, AZ (17%), and Las Vegas, NV (18%). Cedar Rapids, IA (18%) being something of an outlier.
The below infographic highlights the 96 cities in order from most to least Bible-minded, while also providing a U.S. map that marks the most and least fervent citizenry: 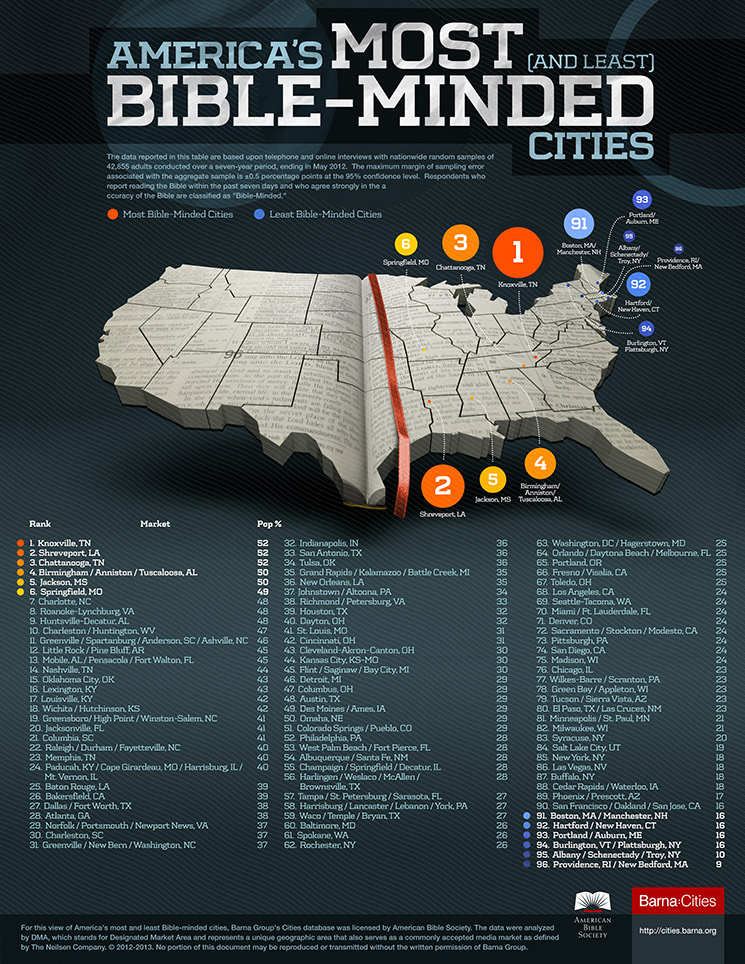