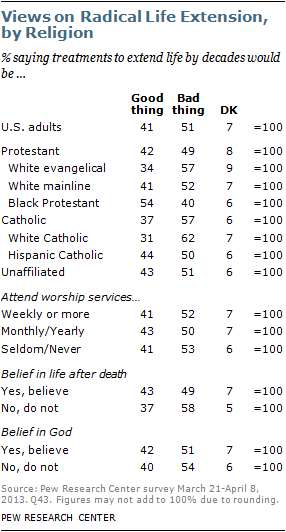 Interviews with religious leaders and bioethicists reveal a range of thoughts about how their religious traditions might react to a world that could include radical life extension, but the Pew Research survey finds only modest differences of opinion on the topic among large religious groups in the general public today. (For thoughts from leaders and theologians from different religious traditions on the subject of radical life extension, see “Religious Leaders’ Views on Radical Life Extension.”)

Black Protestants are among the most likely to say radically longer life spans would be a good thing for society. About half of black Protestants hold this view (54%), compared with about four-in-ten white mainline Protestants (41%) and about a third of white evangelical Protestants (34%). (There are not enough Hispanic Protestants in the survey sample for separate analysis.)

Hispanic Catholics are more likely than white (non-Hispanic) Catholics to think that much longer life spans would be a good thing for society (44%, compared with 31% among white Catholics). The views of religiously unaffiliated Americans are similar to those of the public as a whole, with 43% of the unaffiliated saying radical life extension would be good for society and 51% saying it would be bad.

The patterns by religious group are in keeping with those by racial and ethnic groups. Regardless of religious affiliation, blacks and Hispanics are more likely than whites to see radical life extension as a good thing for society.

In most cases, there is no significant correlation between respondents’ religious beliefs and practices and their views about the effects of radical life extension on society. For example, people who say they attend religious services at least once a week do not tend, on the whole, to take a more (or less) positive view of radical life extension’s possible impact on society than do people who attend worship services less frequently. The same is true of the importance that people attach to religion in their lives, their self-reported frequency of prayer, whether or not they believe in God or a universal spirit, and their belief in heaven and hell – none of these measures are significantly associated with views about the effect of radical life extension on society.

There are few differences in personal preference for receiving life-extending treatments based on other religious beliefs and practices, including the importance of religion in people’s lives, frequency of prayer, belief in life after death, belief in God or a universal spirit, and belief in heaven or hell.

Is India the Fastest-Growth Gospel Territory?