Dr. King and my trip to Montgomery 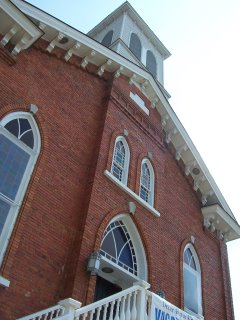 It's funny how you miss things. I was born in Montgomery and lived in Wetumpka (just outside of Montgomery) for several years. I knew that Montgomery was famous for it's historical sites. However, living in the south we were primarily told about the Little White House or as it is also known, the First White House of the Confederacy. Oh yeah, there's also a small Church where some black guy pastored next to the Capital. We never were really told to much about this little insignificant church though, just the Capital and the little white house.

Well, this past Monday Holly and I found ourselves headed down to Montgomery to complete some adoption paper work. I finally took the time to go and visit that little insignificant church were the black man pastored. I visited the Dexter Ave King Memorial Church. This is the Church that Dr King pastored from 1954 to 1960. We were not able to go inside the Church but had a great time touring the outside. It is an incredible feeling to stand on those steps and realize that Dr King and many other civil rights leaders have walked those very steps. I am sorry that many revere the little white house of the confederacy more than this little church. But, that's kind of the way that it goes. Those that fight for themselves get applauded as heroes and those that fight for others often come from and find themselves in the fringes. They are the ones that get passed by. I see this as sort of a paradigm of the church throughout history. When the church has really been working as the people of God participating in the Missio Dei, it has found itself in the minority role where its prophetic voice stands out and rings loudly against a sea of sameness. I pray that we will not loose the "small" prophetic voice of the church. While the rest of the world is fighting for what they deem necessary, may the Church of God (not necessarily the denomination) continue to fight for justice and God's kingdom from the fringes without fanfare. Visiting the King Memorial Church only took a few minutes but will be a few minutes that I will not quickly forget. 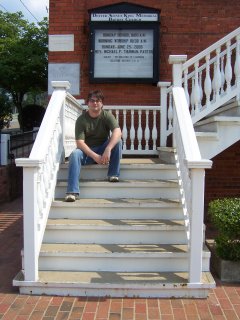 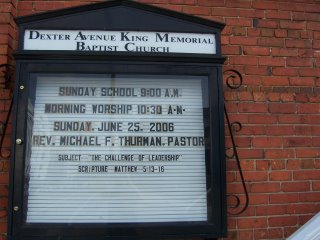 *Notice the scripture text that is being used in the next service. I find this very fitting.*