The Secret Message of Jesus 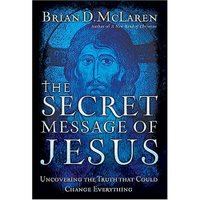 I just finished reading the secret message of Jesus last week. Let me say first of all that I really enjoyed the book and would recommend it to anyone. Having said that, if you have read McLaren's other works, then you have a good idea of what he is going to say in this book. Here's my problem with the book, the presupposition of the book's title "The Secret Message of Jesus" is that the message that is included in the pages following this title are in some way a revelation of a "secret" message of Jesus. I guess that I have been in this whole emergent conversation a little too long now, but the message given in the book is simply a restatement of the message of Christ that others are teaching who are taking serious the hermeneutical issues of postmodernity. What I mean by all of this rambling is that it is hard to believe that there are people that this message would be new to thereby requiring the book's revealing of its secrecy. I guess we all see through our own presuppositions, however, it is hard to understand why some are fighting so hard against works like this and others that are trying to take serious the words of Christ in light of cultural and social factors. Here's the basic message of McLaren (or rather Jesus') secret message:

The book is in three movements; the context of the message, wrestling with the message and what the world and our spirituality would look like if we took this message seriously. I have to say that the best part of the book lies in the second and third sections. The major point of the book is that the message of Jesus has been so watered down by the gospel of accommodation that is has lost its pointed edge that pierces through injustice, poverty, bondage, sickness, environmental concerns, and even severs connections with the empire when they become too entangled with the church. If you know the term holistic salvation, then you know what McLaren is saying here. In essence, the gospel is good news to all people and all creation. God is in the process of saving us and our world, not just our souls (though this is part of the plan). I don't understand why some of the fundamentalist critiques of this book bash McLaren for including these aspects? Do they want or look forward to the rest of creation blowing or burning up? I understand that we should be concerned with saving people's souls, but what about the rest of the person? Can their bodies be healed? Can their minds be healed? Can their families even the world around them be healed? I just don't understand sometimes.

One of the main things that sticks out to me in the book is the chapter on seeing the kingdom. McLaren talks of a guy who goes to Sea World with his family. As the guy and his family are watching the killer whales swim in synchronization, he finds himself wiping away a tear as he is overcome with emotion. He realizes that his daughter is doing the same thing. He finally comes to the conclusion that moments such as these are moments that we see the world as it once was, as it will be, with whales dancing in harmony. I can relate. I have had these moments. We are never given a big picture of what the kingdom of God looks like. We merely have a series of still images that give a particular angle, a new vantage point for seeing what the kingdom of God is like. You can't know the totality of the kingdom's economics, but you can know that it is easier for a camel to fit through the eye of a needle than a rich person to enter the kingdom. You don't know exactly what you will do in the kingdom, but you know that you have potential like a mustard seed, though its small, you can produce a hundred times more. The parables, Jesus' teachings, etc. were all glimpses of the kingdom, not a picture. The kingdom of God is about a way of life and not only about an existential belief in a God who cares only about moral behavior. McLaren does a great job of helping us see this.

Has anyone else out there read the book? I would be interested to hear what you have to say about it.

Now, for some comic relief, here are some links to reviews of the book from the fundamentalist community.