How Obama’s faith has changed 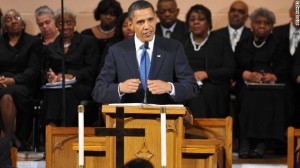 In Obama’s first term, an evolving Christian faith and a more evangelical style

Editor’s note: This is the last in a series about the faith lives of the presidential candidates, which includes a profile of Republican presidential nominee Mitt Romney.

President Obama’s prayers for a strong first debate may not have been answered, but that doesn’t mean the prayers weren’t happening.

Before he stepped onto a Colorado stage earlier this month to face off with Mitt Romney for the first time, Obama joined a conference call with a small circle of Christian ministers.

“The focus of that prayer was, ‘Oh, Lord, you know precisely what the president needs to say,’” says Kirbyjon Caldwell, a Methodist megachurch pastor from Texas who helped lead the call. “’You know what this country needs during the next four years.’”

“’And so I would pray that your primary will and words that you want the president to say will fall from his lips,’” Caldwell goes on, recalling his prayer.

Obama, for his part, was mostly silent.

“There’s a profound and genuine humility in the presence of Christ himself,” Caldwell says, describing the president on such calls. “I think he recognizes it as a holy moment.”

It was the second time Caldwell and Obama had prayed by phone in as many months. The two had connected in August on a prayer call Obama has hosted on his birthday every year since coming to the White House.

Though he famously left his controversial pastor, the Rev. Jeremiah Wright, the year he was elected to the presidency, a handful of spiritual advisers close to Obama say that his time in office has significantly deepened his faith.

The making of a candidate: Mitt Romney’s faith journey

Stephen Mansfield, a former Christian pastor who wrote the book “The Faith of Barack Obama,” goes so far to say that Obama has experienced a spiritual transformation.

“I think we do have at heart a new man, so to speak,” says Mansfield, who worked closely with the White House and with some Obama religious advisers on his book. “He has undergone a pretty significant personal religious change in his first term.”

Methodist minister Kibyjon Caldwell, right, has grown close to President Obama after serving as a spiritual counselor to President George W. Bush. Here, Caldwell and Bush share a stage in 2003.

Obama’s faith advisers say Mansfield goes a step too far, though they acknowledge that when it comes to his faith, Obama has changed.

“There is a deepening development in his relationship with God,” says Joel Hunter, a Florida-based pastor who has been in touch with Obama nearly every week since he took office. “He chooses to stay faithful in daily habits of study and prayer and consistent times of interchange with spiritual leaders.”

“I am not sure he did that before he came to the presidency.”

Whether or not Obama has been spiritually “reborn” in the evangelical sense, his spiritual counselors say the president’s faith has helped shape his first term in ways that haven’t been appreciated by voters or the news media.

And they say the presidency is bringing Obama to a new place in his faith – building on a system of belief and practice that helped bring him to the White House in the first place.

These days, when the president talks about his faith, he sounds like a born-again Christian.

Addressing the National Prayer Breakfast in Washington this year, Obama recalled meeting the nation’s most iconic evangelical Christian, Billy Graham, and described his struggle to find the right words as he prayed aloud with the aging evangelist.

“Like that verse in Romans, the Holy Spirit interceded when I didn’t know quite what to say,” Obama told the gathering, invoking the New Testament.

It was hardly the only part of the speech where Obama was speaking “Christianese” – employing a lexicon familiar to evangelical Christians, who put a premium on quoting Scripture and communing directly with the Holy Spirit.

At the same breakfast, Obama spoke of spending time every morning in “Scripture and devotion” and dropped the names of “friends like Joel Hunter or T.D. Jakes,” both well-known pastors of evangelical megachurches.

“He was talking like Billy Graham” at the breakfast, says Mansfield, who also wrote an admiring spiritual biography of former President George W. Bush.

Even in the more secular setting of the Democratic National Convention, Obama hinted at an intense White House prayer life, along with his need for God’s grace.

Some say President Obama sounds like an evangelical when he speaks about his religion, echoing the famous evangelist Billy Graham. The two men met at Graham’s mountaintop home in North Carolina home in 2010.

“While I’m proud of what we’ve achieved together, I’m far more mindful of my own failings,” Obama said in his acceptance speech, “knowing exactly what Lincoln meant when he said, ‘I have been driven to my knees many times by the overwhelming conviction that I had no place else to go.’”

Such pious talk marks a departure from how the president discussed his faith life before his White House years.

Back then, Obama cited his religion more as a basis for social action than for spiritual sustenance. He would temper declarations of belief with affirmations of doubt.

Asked in a 2004 interview whether he prayed often, Obama, then a candidate for U.S. Senate in Illinois, responded: “Uh, yeah, I guess I do.”

In a 2007 interview with the Chicago Sun-Times, Obama voiced skepticism about Scripture.

“There are aspects of the Christian tradition that I’m comfortable with and aspects that I’m not,” he said. “There are passages of the Bible that make perfect sense to me and others that I go ‘Ya know, I’m not sure about that.’”

These days, Obama forgoes such equivocations in favor of a full-throated Christianity.

To Mansfield, the evolution of Obama’s comments on religion bespeak a born-again experience, prompted largely by the president’s break with Wright and his arrival into a circle of spiritual counselors that includes many evangelicals.

The White House declined requests to speak to Obama.

But Hunter, the president’s closest spiritual counselor, says Obama has technically been a born-again Christian for more than 25 years, since accepting Jesus at Wright’s Chicago church in the 1980s.

But it’s in the last four years that the president has become more evangelical in his habits.

He now begins each morning reading Christian devotionals on his Blackberry.

And then there’s the circle of pastors Obama has begun praying with before big events like the first presidential debate.

A circle of evangelicals

After landing in Washington following his 2008 election, Obama shopped around for a new church. But he wound up making his spiritual home instead among a circle of far-flung pastors that includes Hunter, Jakes and Caldwell, the minister from Texas.

Conference calls with the group started while Obama was still a presidential candidate, including on the night of his 2008 victory. The president-elect spoke by phone with Hunter and other Christian ministers, rejoicing in victory but also grieving the death of his grandmother, who helped raise him, just a few days earlier.

The migration from Wright – who almost brought down Obama’s campaign with videos that showed him sermonizing about “God damn America” and “the U.S. of KKK A” – to this new group, says Mansfield, has been underappreciated.

“[Obama] went into the Oval Office … questioning the only pastor he’d ever had,” Mansfield says. “Wright left him humiliated.”

“And there were deeper questions about the theology that [Obama] had received,” Mansfield continues. “Some part of Wright’s religious orientation had failed.”

CNN’s Belief Blog: The faith angles behind the biggest stories

Mansfield notes that the chaplain who has presided for the last few years at Camp David, where Obama spends many Sundays, is also an evangelical.

Some of Obama’s spiritual counselors credit Joshua DuBois, executive director of the White House Office of Faith-based and Neighborhood Partnerships, with leading Obama to a more evangelical-flavored Christianity. Caldwell calls him the president’s personal pastor.

A former associate pastor at a Pentecostal church in Boston, DuBois is the one responsible for sending Obama Scriptures and scriptural meditations five days a week; Hunter does it on the other two days.