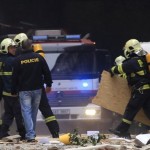 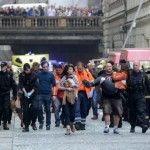 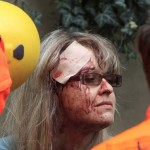 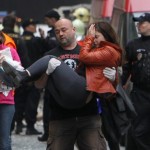 A powerful blast believed to be a gas explosion ripped open an office building in the center of Prague on Monday, injuring at least 35 people and sending shockwaves through the heavily touristed Old Town. Authorities fear several people are buried under the rubble. The blast shattered windows in the scenic district of charming streets and postcard-pretty buildings and left tourists stranded on street corners with baggage-loaded trolleys, unable to get into their hotels.

An AP Television cameraman filming at the time of the blast said the physical impact could be felt on the famed 15th- century Charles Bridge, which was packed with tourists. The blast occurred on Divadelni Street at about 10 a.m., in one of a row of several-story tall brick buildings dating back about a century. The street was covered with rubble and sealed off by police, who evacuated people from nearby buildings and closed a wide area around the explosion site.

“There was glass everywhere and people shouting and crying,” Vaclav Rokyta, a Czech student, told the AP near the scene. Prague mayor Bohuslav Svoboda ruled out a terrorist attack, saying the blast was a gas explosion. Officials had estimated that up to 40 were injuries, but Zdenek Schwarz, head of the rescue service in Prague later narrowed that down to 35. He told reporters that 30 of the injured, two of them with serious injuries, were taken to hospitals for treatment. He said five people were treated at the scene. Some appeared bandaged and with faces still bloody.

Among the injured were two Portuguese women, another two women from Kazakhstan, a man from Slovakia and a German women, although none of their injuries was serious, the rescue service said. Rescuers were still searching the rubble, using sniffer dogs, and two or three people were still believed to be missing, firefighter spokeswoman Pavlina Adamcova said. Windows in buildings located hundreds of meters from the blast were shattered, including some in the nearby National Theater, an ornate 19th-century structure that is one of the most important cultural institutions in the Czech Republic.

Prague is a major tourist capital, visited every year by legions of students, backpackers and others from around the world. In 2012, a total of 5.4 million people visited the city as tourists, with a large majority those from outside the country — many from Germany, Russia and the United States. The Faculty of Social Sciences of Prague’s Charles University and the Film and TV School of the Academy of Sciences of Performing Arts are located next to the damaged building, and students had to be evacuated.
“I was in the bathroom, no windows, the door was closed. Honestly, if I had been in my bed I would have been covered in glass,” said Z.B. Haislip, a student from Raleigh, North Carolina, who was in a nearby building. The road closures caused major traffic disruption and confused thousands of tourists. Prime Minister Petr Necas said in a statement he was deeply affected by “the tragedy of the gas explosion.”

JUSTIFICATION in the Fields of the Wood at Prayer Mountain in Murphy, NC