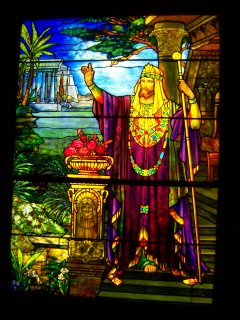 Several days, weeks, months, years, ago I posted an entry centering around Solomon. My question was this: "why is Solomon named 'Jedidiah' by God through the prophet Nathan? Did everyone simply forget about this name that he was given? Why did God himself refer to Solomon as 'Solomon' instead of Jedidiah?" I had a gut feeling that the inclusion of the name in the text was there for a specific reason. I have to admit that I still don't feel that I have the complete answer, but here are my further thoughts on the subject.

(1) Solomon is conceived at the same time that God judges David's sin by killing his son conceived in sin. Solomon is the first "legitimate" child of David and Bathsheba. I believe, along with several other scholars, that God's naming of Solomon as 'Jedidiah' is a way of showing David that he still has a chance of fulfilling his God-given destiny. The name Jedidiah means "beloved of God." God hasn't given up on David and shows this through the naming of Solomon.

(2) Here's where I venture out in my interpretations. The first thought is one that seems to be the consensus of the scholars that I have referenced. This second thought is mine and may venture away from the beaten path. Here's the deal. After Solomon takes the leadership of Israel, he begins to build the kingdom that we all know of so well. Solomon's temple is the envy of the nations, Solomon's wealth is known by all (look at the queen of Sheba narrative). The list of Solomon's achievements go on and on. However, if you look closely at the text it appears that all is not well. The kingdom is built upon the backs of slave labor. Apparently the memory of the Israelites is relatively short. (remember I am the Lord that brought you out of Egypt!) The kingdom becomes a kingdom that continues to grow in its pursuit of wealth and power. This pursuit of wealth and power becomes the impetus for Solomon's acclimation into the deities of his political marriages. As you can see this road goes downhill quickly.

In reflecting upon this, and thinking of our present situation in the US and the way that most American's live their lives, I can't help but to think that the narrative of Solomon is being lived out right here in the US. While I was thinking on this one day I just simply said to myself, "that's what happens when you forget that you are the beloved of God." I think myself solved the mystery for me. What if the writer is showing us that Solomon, though beginning with good intentions, somehow allowed his pure intentions to become perverted thinking that HE could build the kingdom that would be the fulfillment of God's plan? What if all along, God was asking Solomon to participate in what GOD was building, resting in the knowledge that God has chosen Solomon and rooted him in the one who created all things? What if we, in present day US, lived our lives working with God, building his kingdom instead of trying to build our own? What if we rested in the name that God has already given us, "beloved of God" and quit trying to build a name for ourselves?

I know that this interpretation is highly tainted by my present social location. But after all, aren't all interpretations tainted by such? Just a thought. Please give me some feed back and let me know what ya think!