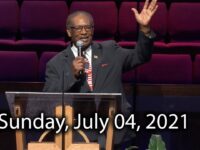 Cleveland, TN Vice Mayor Avery Johnson speaks on Independence Day, 2021. His scripture reference is taken from the Book of Philemon. Your generosity helps this ministry move forward! Give online at https://westmorechurch.com/give. ? Subscribe to this channel for powerful and inspiring praise and worship: https://www.youtube.com/westmorechurc…. For more information about Westmore, visit westm... »

The mayor of a Texas city is raising some eyebrows after he officially declared 2014 the “year of the Bible.” MyFoxDFW.com reports Tom Hayden, the mayor of Flower Mound, made the declaration at a city council meeting last month. Hayden says he had considered making the declaration for two years because he wants his community to connect through the Bible, and finally decided to do so in 2014. ̶... »