Take a Biblical Stand at the Polling Place 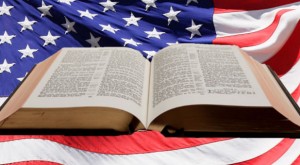 In just a few weeks millions of Americans will determine the destiny of this great nation. Some will blindly enter the booth and cast an uneducated vote. Others will robotically choose their traditional family political party. Then we have those who fear the potential outcome, do their homework and confidently vote according to a well-informed opinion.

Please allow me to give you some ammunition as you enter more aggressively this war of wars. This weaponry comes from the Bible, the book that according to the Gallup Poll organization can be found in the vast majority of American homes. This Bible may be hidden or sitting dusty on a shelf, but regardless, it is the religious book that most citizens respect.

As the great statesman and true father of modern day American Christianity always says, “I would like to answer your question by telling you what the Bible says.” Of course I’m speaking of the Rev. Billy Graham. Now 93 years of age, he still leans on the Bible when answering life’s most pressing questions. I agree, and say, “Don’t just trust my opinion, look to the Book!”

Here are a few Scriptures that serve as a litmus test for electing our politicians. This pre-election editorial is not intended to be biblically exhaustive. That would require many pages. I just want to ‘prime the pump.’ Hopefully the water will begin to flow, we’ll have a better understanding of God’s viewpoint and please Him on Election Day. Here we go!

Is the nominee holy and believes that America should be a godly, righteous nation? The Bible says: “Righteousness exalts a nation, but sin is a reproach (disgrace) to any people” (Prov. 14:34).

Does the nominee schmooze leaders of ungodly, wicked nations? Is the nominee living an upright life, which means does this person adhere strictly to righteous moral principles? The Bible says: “By the blessing of the upright the city is exalted, but it is overthrown by the mouth of the wicked” (Prov. 11:11).

Has God rejected the nominee because of an obvious straying from His statutes? Has that person been found to be deceitful (misleading others)? The Bible says: “You (God) reject all those who stray from Your statutes, for their deceit is falsehood” (Ps. 119:118).

Ask yourself: Of the candidates, which ones honor righteousness and have a genuine belief in the God of the Bible? Of the candidates, which ones negate our heritage and publicly proclaim that America is not a Christian nation? Now, please don’t write me attempting to split hairs. Everyone knows in their spirit the ones who are genuinely sincere and are capable of guiding this nation back to greatness.

There is not a perfect candidate. But ask yourself which ones are further from the Truth. Unfortunately, Jesus is not running in this election but He is running this election. Heaven lifts up one and puts down another. The Bible says: “For exaltation comes neither from the east nor from the west nor from the south. But God is the Judge: He puts down one, and exalts another” (Ps. 75:6,7).

Thought I would share this video I made on Islam….

Great service last night at the Weslyan Church at Fairfield. Off to the Barbourville Church of God in Barbourville Kentucky. 6:30pm #OurCOG