The Miracle Of Opportunity 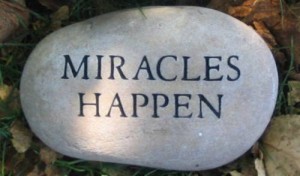 What an incredible moment in Luke 18! The God of the universe, the creator of everything, asked Bartimaeus, “What do you want me to do for you?”

What a miracle! What a God opportunity! Bartimaeus was a blind man that saw his opportunity (no pun intended) MIRACLES HAPPEN…sometimes they are housed in an opportunity.

Bartimaeus is a model to imitate, and no, I’m not promoting NAME IT and CLAIM IT. God is not Burger King, where you can have it your way. I’m speaking of imitating the way he acts on his God given moment of opportunity, in spite of everyone around him telling him to keep quiet. He simply keeps calling for Jesus to have mercy and that opportunity leads to the miracle  that he needed.

Bartimaeus would have remained blind, had he not seized the opportunity of His God moment. Most often, miracles are found in obeying the opportunity God has placed right in front of you.

I like to say it this way: Miracles Are Often Wearing The Clothing Of Opportunity

My wife and I moved to San Francisco many years ago to start a new church.(We were there for 13 plus years) She and I appeared before the state council for our denomination and shared our calling. After pouring out our hearts, we were expecting 100% of the men to give us the green light and their blessing. It was just the opposite. They turned us down and thanked us for our time, and we walked out the door.

As we were walking down the hallway to leave, my wife was visibly upset. I asked her, “What’s wrong?” She responded, “What are we going to do?” My reply was simply, “Start a church.”

Seeing she was not satisfied with my answer, we returned to the board room. I knocked, and then pushed the door open. I apologized for the interruption, but shared with them that I had a few more things I would like  to say. I proceeded to tell them that we meant no disrespect, but we would be starting a church for our denomination, or an independent work because we had to obey God.

After a few moments of silence, a man at the end of the table (who is a dear friend of mine) began to clap and stand up. It was one a man standing ovation. I believe that is the way God does us. He gives us a standing ovation, when we obey the opportunity He has called us to obey, even when  everyone else is telling us, we can’t.

Allow me to share a passage with you with some comments.

35 As he drew near to Jericho, a blind man was sitting by the roadside begging.

36 And hearing a crowd going by, he inquired what this meant. 37 They told him,  “Jesus of Nazareth is passing by.”

He was listening to what was going on around him. He was listening for his opportunity.  Open your ears! You might just be surprised at what God is trying to set up for you.

39 And those who were in front rebuked him, telling him to be silent. But he cried out all the more, “Son of David, have mercy on me!”

He had a desire to move passed the one’s that were just curious about Jesus “You may delay, but time will not.” –Benjamin Franklin He opened every widow of his heart to the opportunity

40 And Jesus stopped and commanded him to be brought to him. And when he came near, he asked him, 41  “What do you want me to do for you?” He said, “Lord, let me recover my sight.”

Isn’t that really the miracle we all need, to recover our sight? To see what God see’s; to see how God see’s things? If we did, and acted on it more often, we would change our lives and those around us.

42 And Jesus said to him, “Recover your sight; your faith has made you well.” 43 And immediately he recovered his sight and followed him, glorifying God. And all the people, when they saw it, gave praise to God.

The miricle for Bartimaeus was found in the opportunity of Jesus passing by. Once he was rescued, he followed and glorified God and everyone saw. I just love that. His life became a witness. You life can also.

Today, many will open their eyes to the miracle opportunities that surround them. Why not you?

5 Things To Do When Doubt Has Captured Your Loved One Winning Over The Voice Of Self Condemnation Is Sex Greener On The Other Side Of The Fence?

The Story of the Cross.