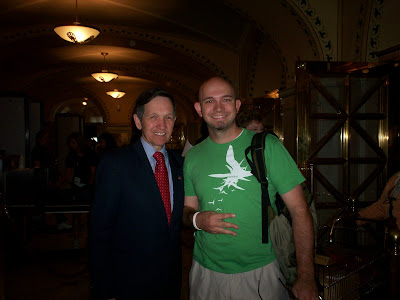 I just got back from Washington, D.C. I was a chaperone for our school's 8th grade class trip. What a fantastic week in our nation's capital. I will share some more pictures later, but I wanted to get this one up in honor of Travis Johnson.

We got to see Congressman Kucinich twice on our trip. the first time was at the grave site of Robert Kennedy. It was not an appropriate time or place to ask for a picture. However, I was rewarded the next day by running into him (almost literally) at the Library of Congress. I told him I was from his district in Ohio (which is true, I went to high school in Parma) and asked for a picture. I couldn't help but think of my friend Trav, flashing the "W" with Janet Reno, but chickening out with Hillary.