It's been two months to the day since I last posted. In that time, I have created a short film, jumped off a mountain, been surrounded by skulls, climbed to the top of a 650-year-old cathedral, been in Hitler's bunker, summited the eleventh highest mountain in the world, gotten lost on trains, played Gene Kelly, been to "Vegas," seen red-light districts, visited a concentration camp, taken a ferry to a coastal mountain village, viewed Nazi and Communist propaganda sites, and had my flash drive confiscated by airport security.

I must write on another time of these adventures, but that being said, Apple's iOS4 was leaked yesterday. I installed it as soon as I knew, and it is pretty freaking awesome. Multitasking isn't as fun as it sounds, but it's nice to have. The REALLY nice features are the app folders and the home-screen wallpaper. That, and I have a new operating system days before 95% of iPhone users. It's kind of nice.

Lee University has purchased First Baptist for $5 million. Additionally, a new Pedestrian Mall is under construction behind Sharp-Davis. It will make for an easier commute between the School of Religion and the rest of campus. We're losing 17 parking spaces, but gaining easier and safer access to the SoR. The new Ped Mall will also serve to create a "second center" of campus. Historically the Sharp Pedestrian Mall [the proper name for the one in front of Simmons, Tharp, and Cross] has been the middle of campus, and 95% of the buildings are built facing or near it. As that is becoming less and less the case, a refocusing of the "middle" of campus is necessary. That is what this new Ped Mall is doing: bridging the gap between the SoR/First Baptist and the rest of campus. And look, there are even pictures! 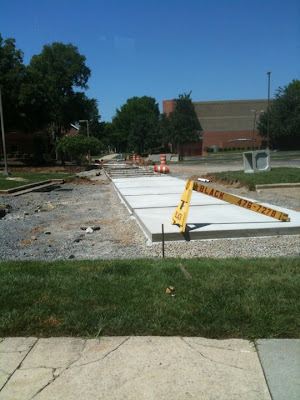 My book has been "postponed" until next summer, but in the meantime I plan to release a small companion version entitled "The Hitchhiker's Guide to Lee University" for this fall's freshmen. More details will be released later.

I am learning how to cook. "The Matt Smith Guide to Stupid Cooking Mistakes" might be published at some point.

I'm about tired of towing cars from here to there.

"The Big Bang Theory" is one of the FUNNIEST freaking shows on television! Seriously.

I know all you Wordsmitherd addicts have been going through withdrawals for the past two months, but it's all good now. Get your fix, until the next time I post. Of course, nobody knows quite when that will be. Until then...

Does it show a lack of faith in God to ask other people to pray for you?

Good morning. I see that former bishop of …