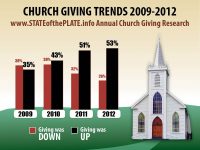 National church survey reveals important data about the state of the church in America today The survey has been conducted for the past two years in several hundred congregations from all denominations across the United States. All collected national trends provide information about essential ministry dynamics and characteristics of the local congregation like: Church Type [...] »

Chronology of Jubilees Each 50th year may have been specially celebrated in ancient Israel (The last jubilee year may have been officially celebrated as late as the year 121 BCE)  Sabbatical years In the late Second-Temple Era, the custom of letting the land rest in each 7th year was an important tenet of Jewish law. Flavius Josephus, a priest-historian who lived in the first century CE, desc... »

CHRONOLOGY OF COVERAGE NOV. 26, 2014 Federal Judges Kristine Baker and Carlton Reeves strike down same sex marriage bans in Arkansas and Mississippi, respectively, but both orders are placed on hold so states can consider appeals. MORE NOV. 25, 2014 Adam Liptak Sidebar column; fact that same-sex marriage will be banned in up to 15 states, at most, should Supreme Court take up question this term of... »