Statement on legalizing gay marriage from Assemblies of GOD

Rev. Larry L. Greenfield, executive minister of the American Baptist Churches of Metro Chicago As a Baptist Christian, it grieves me that some of my sisters and brothers in the faith are advocating a position on how the government should deal with same-sex marriage that directly violates what Baptists stand for. The media report that some Baptist clergy are now teaming up with secular opponents of... »

Jan. 6, 2014 – US Supreme Court Halts Gay Marriages in Utah “The Supreme Court on Monday [Jan. 6, 2014] blocked further same-sex marriages in Utah while state officials appeal a decision allowing such unions. The terse order, from the full court, issued a stay ‘pending final disposition’ of an appeal to the federal appeals court in Denver. It offered no reasoning.” Ja... » 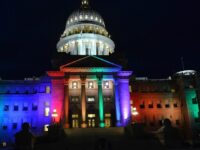