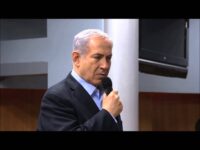 Prime Minister Netanyahu Sends an Important Message to the World

(CNN) — Ariel Sharon, whose half century as a military and political leader in Israel was marked with victories and controversies, died Saturday after eight years in a coma, Israeli Army Radio reported. Sharon was 85. Sharon died at Sheba Medical Center in the Tel Aviv suburb of Tel Hashomer. The Israeli statesman was a national war hero to many Israelis for his leadership, both in uniform o... »