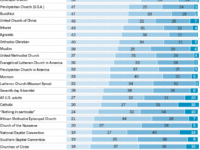 Creflo Dollar Gets Jet After All

Creflo Dollar Will Get a $70 Million Jet After All »

A massive tornado at least a half mile-wide with 200 mph winds churned through Oklahoma City’s suburbs Monday afternoon, killing at least 51 people including at least 20 children, flattening entire neighborhoods and destroying an elementary school with a direct blow as children and teachers huddled inside. Amy Elliott, a spokeswoman for the Oklahoma Medical Examiner’s Office, said earl... »