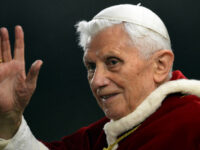 The Vatican is raising the possibility that the conclave to elect the next pope might start earlier than March 15, the earliest date possible under current rules that require a 15-20 day waiting period after the papacy becomes vacant. Vatican spokesman The Rev. Federico Lombardi said top officials can study the Holy See’s constitution to determine whether such a rule change is possible. The ... » 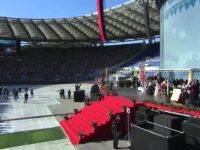 Pope fathers charismatics into the Vatican in 2017

Meeting more than 50,000 Catholic charismatics in Rome’s Olympic Stadium, Pope Francis admitted he was not always comfortable with the way they prayed, but he knelt onstage as they prayed for him and over him by singing and speaking in tongues. “In the early years of the charismatic renewal in Buenos Aires, I did not have much love for charismatics,” the pope said June 1. “... »

ROME (AP) — The Vatican on Tuesday unveiled newly restored frescoes in the Catacombs of Priscilla, known for housing the earliest known image of the Madonna with Child — and frescoes said by some to show women priests in the early Christian church. Cardinal Gianfranco Ravasi, the Vatican’s culture minister, presided over the opening of the “Cubicle of Lazzaro,” a tiny burial cham... »