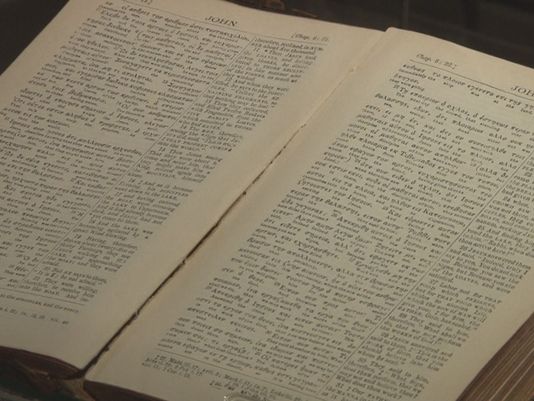 A Bible that survived the sinking of the Titanic is now on display in East Tennessee, and it has ties to our area. You can see the book for a limited time at the Titanic Musuem Attraction in Pigeon Forge. The Bible’s owner was Reverend Robert J. Bateman. He was born in Bristol, England, in 1860. He came to Knoxville in the 1890’s, where he founded the People’s Tabernacle Church on Clinch Avenue. After living in Knoxville, he moved to Florida. Then in 1912, Bateman was back in England for a couple of months. He booked his passage back to America on the Titanic.

“Bateman on the night the ship sank handed the Bible over to his sister-in-law, Ada Ball, who he placed on a life boat and then she returned it to her sister, his wife Emily. On her death bed she gave it to Dr. Harry Upperman from the Baxter Seminary here in Baxter, Tennessee,” said Bob Thone, the actor portraying Rev. Robert Bateman at the Titanic Museum. The Upper Room Museum in Nashville now owns the Bible. It’s on display in Pigeon Forge through the end of the year.

Does the Bible teach that the earth is flat, geocentric,…

Refugees Joining Together for Bible School