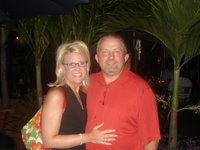 We have been joined on this trip by our good friends, Pat and Jan Wright.