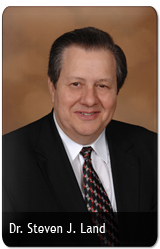 Dr. Steven Jack Land has given 37 years of full-time service to the Pentecostal Theological Seminary (PTS). In addition to teaching every year, he served as Academic Dean for ten years and has served as Seminary President for twelve years. He has decided that his major responsibilities shift from President to a role as teacher, author, and consultant. Dr. Land has requested his new role begin after the 2014 General Assembly of the Church of God when the new President will be officially appointed. The Board will carry out the selection of the new president in consultation with the International Executive Committee of the Church of God. Dr. Land was appointed through a similar process in 2002 becoming the first President to be chosen from the ranks of the faculty.

Dr. Mark Williams, General Overseer and Presiding Bishop, commented that “the Church of God is fortunate to have had Steve Land at the helm of our denomination’s Seminary for 22 years. He is that rare combination of a true academician who is also an accomplished ministry leader and pastor….Passionately committed to Wesleyan Holiness doctrine, he is regarded as a true statesman and premier spokesperson for the Pentecostal movement. I never cease to be amazed at his unique ability to communicate the Gospel of Jesus Christ to people from all walks of life, denominational and religious heritages. Because of his leadership, I believe the future is bright for the Pentecostal Theological Seminary.”

During Dr. Land’s tenure as president, there have been consistent positive evaluations by accreditation teams from the regional Southern Association of Colleges and schools (SACS) and the national Association of Theological Schools in the U.S. and Canada (ATS). The President is quick to insist that what has been achieved was due to the providential work of God and a lot of hard work by the dedicated members of the board, administrative officers, faculty, staff, donors, and church leaders. The federal government in The Integrated Postsecondary Education Data System report (IPEDS) compared PTS to other benchmark schools and found that the Seminary shows high levels of productivity and effectiveness in its operations.

The River and the Altar

Function of the Holy Spirit

What is the real Biblical Justice?