The world is getting more religious 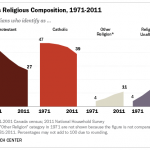 Muslims and Christians are expected make up nearly equal shares of the global population by 2050 for the first time. Atheists, agnostics and other people who don’t affiliate with a religion will make up a smaller fraction of the world’s population in 2050, according to a new study. The Pew Research Center study released Thursday found […]

7 Senior Pastor stress inducing phrases “We’ll figure it out” Translation: I come up with ideas and you figure out how to execute them. I can’t be bogged down with the details. “Its a possibility” Translation: There is no way in heck we’re going to do that, but I don’t like to say no. So instead you keep thinking its a possibility and I’ll keep dreaming up new ideas for you to work on. “That’s […]