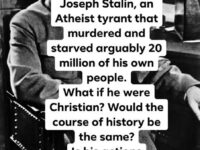 I’ve recently been studying into the topic of morality in…

I’ve recently been studying into the topic of morality in atheism; the depths of immorality is justified to no end by its philosophies, perhaps one of the greatest examples (among many) is Joseph Stalin… Apparently in his early life he went to seminary, but left after being indoctrinated by Marxism and joining Vladimir Lenin’s communist movement, for those that don’t know much about communis... » 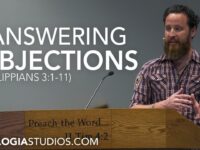 This topic is central to the Gospel of Christ! Justification…

This topic is central to the Gospel of Christ! Justification is an important truth that we as followers of Christ MUST understand! Enjoy! God bless you all! »

Doctrine and Polity Committee Releases Latest on Contemporary Topic You are signed up to receive updates from the Faith News Network ... »

This seems to be a very controversial topic at the…

This seems to be a very controversial topic at the moment and I’d love to hear what y’all have to say about it! “once saved always saved” Yes or no? Forgive me if this was recently posted or posted often, I didn’t see it if it was. Any scriptures would be greatly appreciated if you have them. »