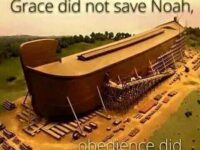 Heb. 11:7 7 Noah was warned by God about things that he could not yet see. But he had faith and respect for God, so he built a large boat to save his family. With his faith, Noah showed that the world was wrong. And he became one of those who are made right with God through faith. »

Soldiers in the U.S. military have been told in a training briefing that evangelical Christians are the No. 1 extremist threat to America – ahead of groups like the Muslim Brotherhood, KKK, Nation of Islam, al-Qaida, Hamas and others. “Men and women of faith who have served the Army faithfully for centuries shouldn’t be likened to those who have regularly threatened the peace and security of the U... »