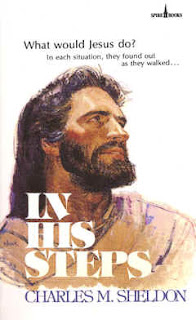 I have chosen to use Charles Sheldon's In His Steps as a part of the eighth grade Bible curriculum where I teach. I have been familiar with the book for years, first encountering the book during the What Would Jesus Do? movement of the mid-nineties. In His Steps is a decent story of a utopian Christian worldview in which a person asks what would Jesus do? before making a particular decision. As I began reading this book to prepare for classes, I picked up on something from my Pentecostal heritage.
The Pentecostal movement typically traces its beginnings to the Azusa St. revival (Los Angeles, CA) of 1906. Those who are familiar with Pentecostalism likely know that the leader of the Azusa St. revival was a student of Charles Fox Parham. It was at Parham's Bible school in Topeka, KS where a woman named Agnes Ozman began speaking in tongues in 1901 after a New Year's Eve prayer vigil.
Charles Sheldon was also from Topeka and to my surprise was a contemporary of Parham's (In His Steps was written in 1896). I've done a little research (by "little" I mean a brief Google search) and could not find an explicit connection between the two men. However, there are some phrases that Sheldon uses in his novel that make me very curious of the spiritual climate of Topeka in the late 1800's.
Sheldon uses "Spirit language" that would be easily understood by 21st century Pentecostals. For example, he describes a prayer meeting where "the Spirit made Himself visibly manifest." In a Pentecostal service we would describe that as "having church." I wonder how that phrase would have been interpreted pre-Azusa street. A Pentecostal reads that and probably thinks of tongue speech or other demonstrative displays of affection. But what did this mean to the original readers? What did it mean for Sheldon who was a part of the Congregational Churches? Did these phrases or this book have any influence on Parham?
In my research of Sheldon and Parham, the only connection I seem to be able to uncover is the fact that Topeka, KS itself did not experience a significant revival during this time. One article suggested issues of racism (likely in Parham's case; not so sure about Sheldon) which may have effected the early Pentecostal movement from spreading throughout the region. This is another instance of God's timing. L.A. probably needed to be the place where the Pentecostal movement really got moving.

#Youwannaimpressme** … can you humm the whole of the Red back Hymnal? I don’t think so. #ourCOG