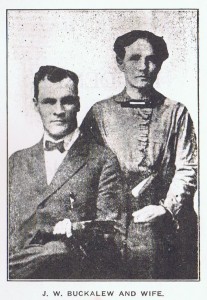 The author of Incidents in the life of J.W. Buckalew was a  Church of God Evangelist. He was born John W. Buckalew in Trion, GA, on 23 July 1870 and he died  24 Jan 1918, 47 yrs old.  He was the son of an ordained deacon in the missionary Baptist church in Trion who strayed from that fold into gambling, drink, running from the local law, and other diversions before finally being saved.
He  was married to Mattie Hines (1868-1941) on 11 Aug 1889 and had a son Jessie (1890- 1890); son Collie Belton Buckalew (1891- ) and a daughter named Grace (Truman Chandler, 1893-1955). He lived in many locations across Alabama and before 1909 was receiving training at the Pentecostal Tabernacle in Nashville, TN.
Church of God Evangel; 14 July 1975, article “Rough and Ready” by Douglas LeRoy: “Most people concede that…J. W. Buckalew…was the most colorful figure in the history of the Church of God…, affectionately called “Rough and Ready” because of his brusque manner and stormy temperament.”

“Like a Mighty Army,” by Dr. Charles W. Conn: “He was then forty years of age, a swarthy, hulking man with stooped shoulders and unusually long arms. Yet, when Buckalew took the pulpit he was a complete master, and one of the most effective evangelists in Pentecostal history, who had great revivals and established sound churches with his roughshod preaching. During the day he picked cotton and did some other migrant work in order to support his family, and at night he preached the gospel.”

The preface indicates the purpose for penning the memoir: “I have noticed that the lives and testimonies of men and women who have been saved from lives of sin in its deepest hue have been a channel through which the Lord touched the hearts of scores of people, and with this idea in view this book has been written. As the divine blessings has come to the author he is desirous of passing it on to others through the pages of this book. May the Lord send it forth and make it blessing to many tired sin-sick souls. Amen.”

Just a Minute with Dr. Tim Hill – Are You Ready for the Rapture?