On Apple as a Religion

(This piece was originally published in Collect Magazine, Issue 2, in February 2011). 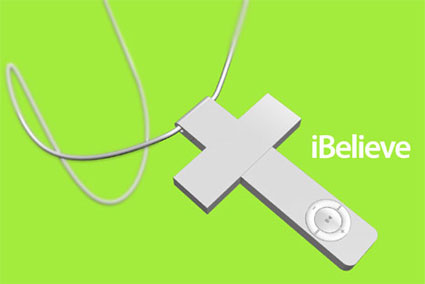 As I write this, it’s nearing four on a weekday morning and I’m slumped in my office chair, bathed in LCD glow, waiting for Steve Jobs to arrive onscreen in trademark turtleneck and faded 501s and announce the future of everything, ever. On the web, bloggers lock in their final prognostications with blusterous certainty, dropping repeated references to dubious, almost certainly non-existent ‘sources’ close to the company. A shaky camera-phone photo of the purported iProduct leaks with minutes to go, and the faithful scour the image for signs of Photoshop fakery. There are hundreds of thousands of us, skipping work, school, sleep, forgoing time with loved ones to watch a videocast of one of the world’s richest men deliver a ninety minute product announcement from a spot-lit stage in San Francisco.

This is not normal behavior. Of course, consumers develop bonds with brands, but the ‘special relationship’ Apple fans feel bonding them to the company is on another level entirely. The Christians have Easter. The Jews have Hanukkah. The Apple-ites have the Stevenote and the Product Launch: a twelve-plus-hour inner-city campout culminating in a ceremonial emptying of the wallet.

Last November, a pair of scholars explored links between Michelangelo’s ‘Creation of Adam’, Caravaggio’s ‘The Doubting of St Thomas’, and a print advertisement for the first-generation iPhone – the suggestion being that those who flippantly denigrate Apple as a po-mo first-world religion may actually be onto something. Those who know a little about Apple’s company history recognise how explicitly the official account has been structured to resemble the New Testament: Genesis – the origin story of a hacked-together wooden box, full of feeble circuitry, known simply as the ‘Apple I’ – is followed by the Book of Jobs, the persecuted Messiah, and his Satanic opponent, one William “Billy” Gates. When Jobs is ousted out of the company in 1985, the world enters a time of darkness – Mac development stalls, Apple almost collapses – until the Messiah returns circa ’98, introducing the iMac and leading the company to salvation (and a gargantuan market cap).

It’s four AM now. As I wait for Apple’s chief executive visionary to take the stage, I’m beginning to wonder: if Jobs is a modern-day prophet, what exactly is his message? And why am I awake, now? What is it about Apple?

Benjamin Brooks runs The Brooks Review, arguably one of the most popular Apple-centric weblogs online. When I contact Brooks for this piece, he doesn’t skip a beat at my suggestion that Apple could seriously be considered less company than religion. “People seek religion wanting to embrace an ideology that betters their life,” Ben tells me. “Apple as a religion stems from users feeling they’ve found something that makes their life better — that’s a powerful feeling.”

I find it interesting that Ben mentions ideology. Every gadget Apple produces comes pre-packaged with a worldview. Few other technology companies – few other companies, period – are concerned with fundamentally altering the way the consumer interacts with the world.
The only company offering something vaguely similar is Google: in late 2009, Google Senior Vice President Jonathan Rosenberg issued a 4,000 word ideological tract to his employees titled ‘The Meaning of Open’. In it, Rosenberg suggested that Google’s defense of transparency, collaboration and free distribution of information could change the future of government, commerce, science and entertainment. “Google product managers,” Rosenberg proclaimed, “you are building something that will outlast all of us.” While conventional companies compete for marketshare, which can ebb and flow, Google and Apple seem to be fighting for something less fickle: mindshare, ideological dominance, control of the future of culture and industry.

“The impression I get from Apple is they design all of their products to fit their worldview,” Ben explains. “And users align themselves with that worldview once they start using Apple products.”

While Sony and Dell compete on price and feature set, Apple offers something less tangible, but possibly more valuable (depending, of course, on who you talk to): meaning. Apple’s product marketing rarely makes mention of tech specs. The iPad isn’t sold as a computer, but as a ticket to a revolution. We’re so eager to get on board that we aren’t asking ourselves about the true nature of the revolution and whether, in fact, it’s even a revolution we’d like to be a part of.

Perhaps the most basic tenet of the Apple worldview is that digital inherently trumps analogue, that any aspect of culture that can’t be reformatted to fit a 9.7 inch touchscreen deserves to go by the wayside. It’s this aspect of the Apple ideology that has led the entire culture industry to a state of mad panic, and subsequent blinkered focus on converting just about everything to an iPad-ready equivalent. Those without any better ideas (read: almost every large-scale publisher) have spent the better part of the last year throwing tens of millions of dollars toward unthinkingly replicating their existing products on the iPad – generally to muted reception.

The New Yorker, evidently hoping to attract a younger generation of readers, launched their iPad app last September with a large-scale ad campaign featuring actor Jason Schwartzman and directed by Roman Coppola. Instead of providing a radical new means by to consume and disseminate content, however, the app acts as little more than a digital duplicate of the magazine. Really, what’s the point? At the time of writing, the app averages one-and-a-half stars in customer rankings on the US iTunes Store, with reviews carrying titles like “Price gouging” and “Deeply Disappointed”. Several users of the Wired Magazine app (which averages two stars out of five), meanwhile, report their digital issues of the magazine “breaking” and disappearing upon restore. The larger book publishers, meanwhile, appear comfortable converting their products for sale through iBooks, despite the fact that Apple’s ebook format is proprietary, supports only a handful of fonts, and tends to destroy proper text formatting. And newspapers, in pegging their hopes on slick iPad-formatted editions, are ignoring what made them great in the first place: good journalism.

Khoi Vinh, who until recently acted as chief design director for NYTimes.com, considers that “the money, time and effort that has gone into these misbegotten [iPad] experiments amounts to a kind of neglect and misdirected focus that borders on a dereliction of duty.” Addressing Condé Nast and Hearst (two of the largest American publishers) directly, Vinh writes: “You’re killing the thing that you love.”

It’s not that Apple’s products aren’t great quality, or even best-of-breed. In fact, the problem seems quite the opposite: Apple’s products are so great that we’ve lost the ability to active our critical faculties. The iPad has developed an unjustified reputation as a technological panacea, a miracle cure for falling profits and declining readerships. What’s really problematic is that so many publishers see the iPad as a solution in itself, leading to a diversion of focus away from content and quality toward catching a ride on the technological bleeding edge.

Beginning in 2011, the University of Adelaide started doling out free iPads to students enrolling in certain first-year courses. Announcing the deal, the uni made sure to emphasise its status as “the first Australian university to use iPads as an essential classroom teaching tool on this scale.” What isn’t entirely clear is whether the introduction of the iPad will actually assist students in learning more efficiently. As with the publishing industry, educators seem to be championing use of the iPad complacently, as though providing a $500+ device to cut down on the cost of textbooks is intrinsically logical.

Yes, it’s clear that gadgets like the iPad can find a use in the classroom: one app, Theodore Gray’s ‘The Elements’, allows students to explore the periodic table visually, by ‘touching’ and spinning virtual slabs of copper or aluminium; another, John Christensen’s Alphabet Fun, teaches young children to write by tracing letters with their fingers – no crayons required. But what’s wrong with students experimenting on real pieces of copper and aluminium in the chemistry classroom? What’s wrong with kids playing with crayons? The worry is that educators, like publishers, are adopting Apple’s iProducts without first thinking hard about how those devices might fill a need or be used to solve existing problems.

“From my perspective, technology is being used as a substitute for good teaching, not as an adjuct to it,” Mandy Thavis (not her real name), a high school English teacher, tells me. Mandy explains that she now lacks the funding to provide her students with more than a single set text per year, the school library having been downsized in favour of a new e-learning initiative. She tells me she’s excited about integrating new technologies into her curriculum (she spots the Kindle in my satchel and says she’d love to further investigate the use of e-readers in the classroom), but is wary of schools adopting gadgetry as a flashy end in itself: “There’s this belief that plonking a kid down in front of a computer will automatically make them learn. It’s not like that at all. Often, well, it’s quite the opposite.”

I’m reminded of a lengthy interview with Steve Jobs Wired published back in early 1996. At this stage, Jobs had not yet returned to Apple, and the interview provides a rare glimpse at a man deeply ambivalent about the role of technology in education and public life. “I used to think that technology could help education,” Jobs began. “But I’ve had to come to the inevitable conclusion that the problem is not one that technology can hope to solve… What’s wrong with education cannot be fixed with technology. No amount of technology will make a dent. It’s a political problem.” If the fundamental structure of the education system is failing children and blocking innovation, then the adoption of technology is a distraction – a means by which to perpetually delay tackling the real problem, which is this: why aren’t our children interested in learning in the first place?

Steve’s keynote is over now, and the bloggers are simultaneously thrilled and underwhelmed: thrilled because the product is beautiful, underwhelmed because, well, what single gadget can fill that gaping God-shaped hole? But that’s the beauty of Apple: behind the reality of the product itself, there’s a promise that whatever’s coming next is going to solve everything. And every time, it almost does.

(Note: this piece was originally published in Collect Magazine, Issue 2, in February 2011. In the two years since I wrote this piece, some things have obviously changed. Still, I think it’s interesting to look back on the early days of the iPad – at the sense of possibility, the belief that the tablet could save publishing and education, and the missteps taken by publishers and educators. What’s interesting to me isn’t what’s changed since this piece was published, but what hasn’t).