What a season we have now entered in the region my family calls home.  WOW!!  The West Virginia Revival is spreading like wildfire and God is on the move here in Mingo and the surrounding counties!  While I understand that God uses all His people as He sees fit to bring about His purpose, I want to share my story (in a nutshell) how I experienced the years leading up to this movement!  I am but one amongst all the obedient servants of our Lord, and I am so glad to be apart!

Revival service at the Williamson Field House in Williamson, WV on April 25, 2016

My wife and I were only married for 1 year when we felt the Lord leading us back home in 2001. At that time, I thought I was heading via a smooth transition into a career in Pharmaceutical Sales.  That was not actually what happened.  A story for another day!  What we actually found were some very difficult situations, nothing smooth at all.  We found suffering and opposition, trials and paths where the next step was very unclear.  Through it all, we learned to trust the Lord and lean not on our own understanding (Prov. 3:5).   The one thing that never changed was our assurance that Almighty God had a plan for our region.... to fulfill at some point in the future.  He had declared that He was to do a "Work of Renown!"  He spoke often in those days of "Transformation" (Isaiah 40) and "Name Changes!" (Isaiah 62)  These and other prophetic words provided the foundation for our vision for living here.   In 2005, I preached a sermon I titled "Watch Your Mouth" and near the conclusion, I encouraged the congregation to "be careful with the words you speak about our region!"  Life and death are in the words we speak, ya know!  I made a faith declaration of my own in that sermon to declare life and transformation over the region in accordance with the vision God had given us, even before we moved back home.  (See the following video clip).

My son, Joseph Isaac was born in 2006 and we named him according to the name and vision we felt God giving us.  Psalm 126:1-2 says, "When the Lord turned again the captivity of Zion, we were like them that dream.  Then was our mouth filled with laughter.."   Years passed and our region seemed to continue in decline, yet the promise, we had never fully forgotten.  I like to think that every time I spoke my son's name, I was making a faith declaration according to Psalm 126.   In July 2014, the company I work for in the coal industry began to announce plans for major layoffs.   I felt we had come to a cross-road and critical decisions were at the door.  Do I look for work elsewhere? Do we put our home up for sell? There were so many things to consider!  In a state of mild panic, the Lord began to speak to me from II Chronicles 20.  (Details can be found HERE)   The Lord's Word brought me the assurance that I needed to trust Him and hold steadfast to the vision. It was also at that time that I felt I should respond in obedience and launch a prayer initiative in the coal industry.  I would connect the group (of about 53) via e-mail and we would pray for our industry and region on Tuesdays.  We prayed together in this way for about 40 weeks.  Then around Easter 2015, while my Pastor preached on resurrections, God began to resurrect some things in me that had been lying dormant!  I walked into a season of prayer and pondering old promises and words of prophecy, and I sought the Lord to see how I should respond to Him in obedience according to how He was moving me.  While praying early one morning, I continued to seek the Lord concerning the significance of my son's age, which I felt in my Spirit was somehow tied to the vision.  He was about to turn 9 years old, and I made it clear to the Lord I didn't understand the significance of 9.  God spoke to me that morning and impressed upon me that 9 was the number for full-term fetal development.  The "conception that had taken place and the baby that was to come" (see video above) was about to be birthed into the earth!  I had never had a Word from the Lord concerning timing before and a sense of urgency began to build.   I felt that I should reach out to my Church and small group and begin to gather the believers to raise their level of faith in the Word of the Lord and His promises concerning our region.  I called this faith initiative the #iBelieve Campaign.  This was mostly done on Facebook, but thanks to God and my Pastor, I was able to explain it and promote it at Church.  Many in my church family joined in and the response was awesome!  We were rising in faith to believe the Lord, who said  "Did I not tell you that if you believe, you will see the glory of God?" (John 11:40)

That was one year ago this month and "WOW!" have some things began to transition here in our region.  We have now been in revival for 7 weeks, and the impact on our region and beyond has been tremendous! 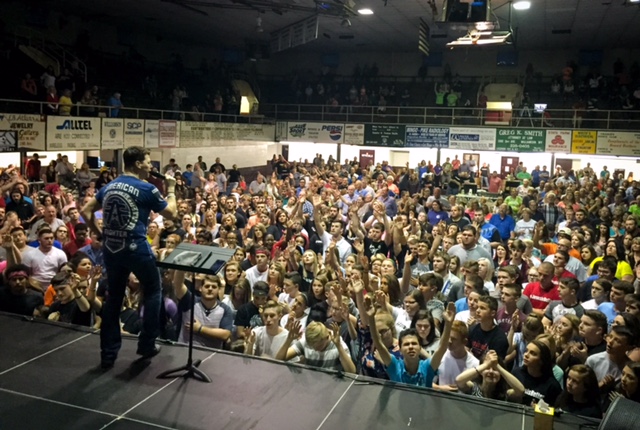 Revival crowd at the Williamson Fieldhouse in Williamson, WV.

News of the #WVrevival or #WVawakening has spread all over the nation and the live stream has been viewed in more than 50 nations of the world.  It has been reported on CBN and that can be found HERE.  There have been more than 3,000 salvation's and many others healed, delivered, and brought back into the Kingdom of God!   Many others, like myself are experiencing renewal in our walk with Jesus and are stepping up and using our gifts to glorify the Lord.  In addition, we are growing more and more hungry to see all that God has for this place!  God has already begun to shake our state and nation.  There have been visitors from Pennsylvania, Maryland, North and South Carolina, Arkansas, and as far away as California and Texas.  The King is here now and this is only the beginning of the "Work of Renown" that God is going to do in this land.  He is turning the captivity and it is truly as if I am dreaming!  I am hoping that the Body of Christ rises as One Temple in which God dwells by His Spirit and One Bride ready for her Groom!  May the fame of Jesus spread from sea to shining sea and America turn back to the Living God!!