Life on the other side 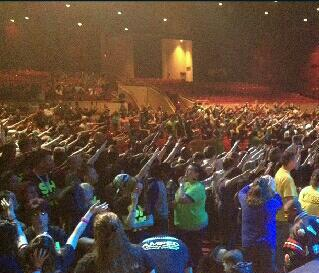 I was a "Shabbacher" long before I ever attended one of the conferences. I had heard about Shabbach, and seen pictures and T-shirts and I will never forget my first Shabbach. When people say it can't be explained, only experienced, they are right. I have a new "first" to add to my list now, however. I had been on staff with a church and been a chaperone for a group of kids for a Shabbach weekend, but I had never gotten to experience what it was like behind the scenes at Shabbach and how it all works, though I had heard about it. Let me tell you, it blessed me beyond measure. Going into a weekend that had followed one of the worst weeks I had had in a while, I knew there had to be something great about to happen. Friday night I got to stand in the back of the sanctuary and just look. I was left, jaw dropped, standing in awe. "I don't deserve to be standing here" was all I kept thinking, but God. As I looked around the room at all of the hands that we raised up in Worship to the King I just couldn't help but tear up. Never in my wildest dreams would it have ever crossed my mind that I could be standing there, and being a part of something so wonderful. But that was just the beginning, Reggie Dabbs began to speak, he made everyone laugh and then punched them all, with words not literally of course. He gave the altar call and I knew it was time to fight. I thought I was overwhelmed at the beginning when I just saw all the people in worship... I soon realized that that was nothing compared to the kids that began to FLOOD the altar, just like a storm sweeping the front they rushed in. I began to pray with them and just seek the Lord and I witnessed lives being transformed, people weeping, shaking, dancing, laughing before the Lord, I have never seen something so beautiful. Saturday I got the priviledge of sharing a small amount of my story and why I am at Shabbach Master's Commission, and as I sat down and looked around the table, I had to hold back my tears once again. I am just amazed, and humbled, and honored, that not only I get to stand under the anointing of my spiritual father, but also Shabbach, as well as Pastor Glenn and Pastor Michael. That alone is grace in motion. To confine my experience this weekend to words, would be unfair. Instead, just take a look at the smile on my face, and the joy in my spirit. This weekend is proof, that yes, we mess up. But God always has a plan. We don't always get it right, but God has a plan. We may go into something like Shabbach ministry-minded ready to minister to somebody, but God always has a plan.

Get off the Assembly Line and into the Wilderness