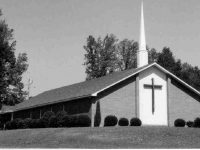 As you can see below, I have posted my church planting proposal to the Executive Council for consideration for the General Assembly 2010 Agenda. It will not be on the Agenda, but has been referred to a study commission headed by Tim Hill. I spoke with him yesterday and began some good dialogue that I [...] »

Cleveland, Tenn.– Empowered21–a broad coalition of churches, ministries and organizations working together to help shape the future of the Spirit empowered movement around the world–has announced plans for a Pentecost Sunday Initiative th... »

In 2007 URI celebrated its 10th anniversary in the Metropolitan Cathedral in Buenos Aires, Argentina.  On the far-right is Jorge Mario Bergoglio Question: What explains the love affair going on between the Vicar of Christ on earth and the modern executioners of his Mystical Body in the media?  The Rolling Stone magazine cover, Time magazine’s ‘Person of the Year”, the Advocate’s glowing praise, an... »

Hill Calls for September Prayer Initiative You are signed up to receive updates from the Faith News Network ... »