November was a historic month, marked by Operation Pillar of Defense, terror attacks against the Israeli home front and other events. Here’s what the IDF faced this past month.

Over the course of November, 1,058 rockets fired from Gaza hit Israel.

November 10: Four Soldiers Injured by Anti-Tank Missile Fired from Gaza. The soldiers were engaged in routine patrol duty when the missile hit their jeep. Only a day before, an explosive tunnel self-detonated while a vehicle was on patrol duty near the Gaza security fence.

November 14: IDF Embarks on Operation Pillar of Defense. The operation was intended to protect the citizens of southern Israel from the constant rocket fire they faced and cripple the terrorist groups in the Gaza Strip, chief among them Hamas and the Islamic Jihad. 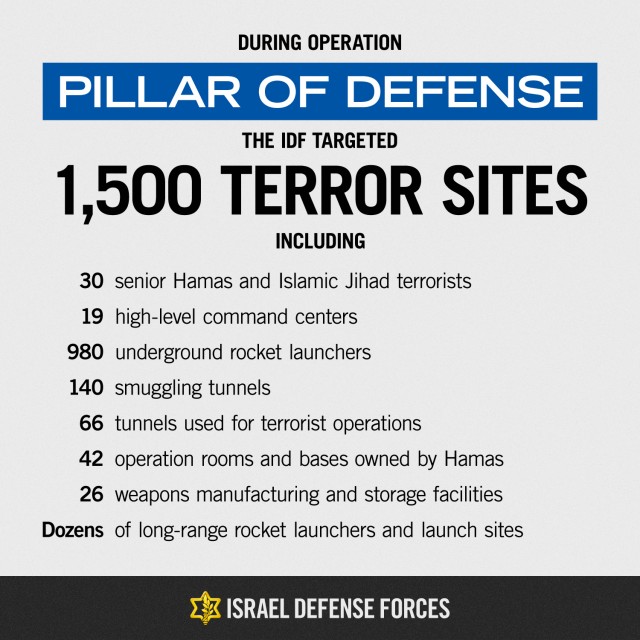 The operation was launched with the targeting of Ahmed Jabari, the commander of Hamas’ military wing. During the operation, the IDF targeted more than 1,500 terror sites in the Gaza Strip. For more information, see the full summary of events.

Israeli civilians were under constant rocket fire during the operation. Major Israeli cities, including Tel Aviv and Jerusalem, were targeted by the Iranian-made Fajr-5 missile.

The Iron Dome anti-missile defense system intercepted 421 rockets during the operation, all of which were aimed at major Israeli population centers. The system is proving to be highly effective in saving lives and protecting the Israeli citizens.

Children sleeping in a bomb shelter in Ashkelon after 14 rockets have hit the city that night, November

November 21: Ceasefire Agreement Comes Into Effect. Following eight days of operations, the IDF has accomplished its pre-determined objectives for Operation Pillar of Defense, and has inflicted severe damage to Hamas and its military capabilities.

Throughout the operation and following it, as it does on a daily basis, the IDF coordinated the transfer of goods, gas and other supplies into the Gaza Strip. For more information, see the COGAT website.

The Cross Isn’t a Brand—It’s a Mission Statement