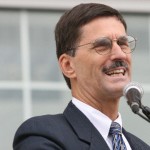 Special to the Cleveland Banner

Lee University president Dr. Paul Conn has been re-elected to a new term, it was announced today by the chairman of the school’s board of directors.

Board chair Dennis Livingston, from Charlotte, N.C., made the announcement Tuesday in a press release following the board’s annual spring meeting on the Lee campus.

“On behalf of the Lee University board of directors, I am pleased to announce that Dr. Conn has accepted our appointment for the 2018-22 term,” Livingston said. “The action of the board was unanimous and enthusiastic, and we are excited about the bright future which all of us anticipate to continue under his leadership.”

Conn was first elected to the Lee presidency in 1986, after serving 15 years on the faculty.

He responded to Livingston’s announcement, “I deeply appreciate the confidence in me which the board has demonstrated with this action.  The board has always supported my leadership in every way, both large and small, and it is a privilege to serve with them and the outstanding faculty and staff of this institution.”

Livingston said the board action occurred during a weekend meeting which coincided with spring commencement activities on the Lee campus.  He said that Conn’s current four-year term began in August 2014.

Conn is a graduate of Lee College who returned to his alma mater as a psychology professor, after earning Ph.D. and M.A. degrees from Emory University, in Atlanta.

Conn’s tenure as president has seen growth from 1,000 students to the current enrollment of 5,300, the growth of the campus from 22 acres to 125 acres with the addition of numerous buildings, and a steadily rising reputation for academic quality among private institutions in the Southeast.

A Cleveland native, Conn and his wife, Darlia, have three children, all of them graduates of Cleveland High School and Lee University.  They have 10 grandchildren.