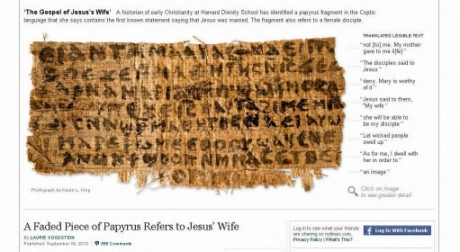 Photo shows the website of the New York Times on Sept. 18, 2012, reporting on an ancient document mentioning the “wife” of Jesus Chris AP
The so-called “Gospel of Jesus’s Wife” isn’t sending shockwaves through the Christian world as some publications have reported. In fact, many are dismissing the ancient fragment as either insignificant or forged.

“This is sensationalism masquerading as scholarship,” said R Albert Mohler, president of The Southern Baptist Theological Seminary, in a commentary on Thursday.

“One British newspaper notes that the claims about a married Jesus seem more worthy of fans of Dan Brown’s fictional work, The Da Vinci Code, than ‘real-life Harvard professors. If the fragment is authenticated, the existence of this little document will be of interest to historians of the era, but it is insanity to make the claims now running through the media.”

The fragment that was unveiled this week by Professor Karen King of Harvard Divinity School is a small, torn papyrus that has eight incomplete lines of Coptic script. King, who received the fragment from an unnamed private collector, says it is a fourth century codex. Nothing is known about the circumstances of its discovery except that it may have been excavated from an area in Upper Egypt.

What has the media buzzing is one particular phrase on the papyrus: “Jesus said to them, ‘My wife … ”

King has stated clearly that this does not prove that Jesus was married. It is simply evidence that some early Christians may have debated Jesus’ marital status. Still, that nuance gets easily lost in discussions and amid “hype”, Dr Joel B Green, Fuller Seminary’s professor of New Testament Interpretation, told The Christian Post.

Christian scholars largely are not fazed by the discovery.

Sean McDonough, professor of New Testament at Gordon-Conwell Theological Seminary, told The Christian Post that he believes the papyrus “is simply the latest in a seemingly endless parade of sensationalist headlines obscuring sober historical thinking about the Bible”.

“At best, we have a scrap of papyrus that perhaps (the fragmentary nature of the piece makes it impossible to have any clear idea what it is actually about) one person in the ancient world, who wrote about Jesus centuries after the fact (Karen King, the scholar who unveiled the piece, suggests late second century, but at this point this is speculation) suggested he had a wife,” McDonough contended.

Dr Christian Askeland, an expert in Coptic manuscripts, revealed that those who specialised in Nag Hammadi and early manuscripts are either “extremely skeptical” about the fragment’s authenticity or convinced it’s a fake.

Askeland attended the International Congress of Coptic Studies in Rome on Tuesday where King unveiled the discovery.

“I have not met anyone who supports its authenticity, although I do not doubt that there must be some,” he wrote in a blog Wednesday.

He noted that the fragment is “not a literally codex leaf”.

“Everyone to whom I have spoken is agreed on this. Gregor Wurst has publically noted that this fragment resembles the erratic nature of magical texts,” Askeland explained.

“What is lacking is convincing evidence which could outweigh the absolute weirdness of the supposed manuscript.”

Scholars at Tyndale House believe, on the basis of the limited evidence currently available, there is a possibility that the script is genuine. The ink, however, would have to be destroyed for C14 testing to prove the authenticity of the piece.

But even if it is proven to be authentic, Christian scholars still view it as insignificant. Historical texts, including the four Gospels in the New Testament, do not say Jesus was married.

“The only historical documents about Jesus that can be reliably dated to the first century – namely the four canonical gospels – make no mention of Jesus having a wife,” said McDonough. “They fully support the traditional view that Jesus had no wife. The recent papyrus find does nothing to change this.”

Mohler, meanwhile, raised suspicion about the motive behind all this. Though King expressed her desire to avoid sensationalism, Mohler pointed to the curious title she gave the fragment.

“King was so concerned about avoiding sensationalism that she titled the fragment ‘The Gospel of Jesus’ Wife?'” he posed.

The Southern Baptist theologian believes that those behind the new finding are trying to cast doubt on the New Testament.

“The energy behind all this is directed to the replacement of orthodox Christianity, its truth claims, its doctrines, its moral convictions, and its vision of both history and eternity with a secularised – indeed, Gnositicised – new version,” he stated.

“Just look at the attention this tiny fragment of papyrus has garnered. Its few words and broken phrases are supposed to cast doubt on the New Testament and the doctrines of orthodox Christianity. A tiny little fragment which, even if authentically from the fourth century, is placed over against the four New Testament Gospels, all written within decades of Jesus’ earthy ministry.”

God is sovereign, and He knocks at the heart of…

When you naively make a vow to God is there…

Innocence of the Young