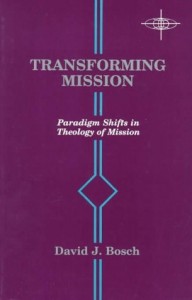 Transforming Mission is a book about missions. The text is not merely a theoretical proposal but rather a detailed historical and theological overview of Biblical missions which results in a new paradigm. In the light of the book, the title means both transforming the present mission model toward a new successful paradigm and the way mission becomes a transformational factor for the community of all believers.

The book begins with a Biblical overview from a historical perspective, as the author examines the development of Biblical missions throughout the Old and New Testaments. A special attention is given to the Luke–Acts writings and the Pauline epistles. In the review of the Pauline mission strategy, Bosch points Paul’s interest to large cities of main importance. Although, the apostle does work in rural areas his main priority remains large cities with sufficient gathering areas where the Gospel can be quickly and more efficiently spread. Such model is supported by a realized eschatology and clear understanding of the quick and eminent return of the Lord. Paul redefines his mission strategy on the basis of this context to purposefully invest more time and effort in metropolises and crowds where the results of his ministry will be more efficient.

The author notes the success of the early church missions, as he points out that regardless of the Jewish rejection of Jesus, thousands of Jews throughout Israel were saved in a short period as a result of the mission of the Early Church. This success is evident from the Scriptures, for the period of time even before the mission was extended to the Gentiles. As the spread of the gospel continued, Bosch writes the mission of the early church extended to the borders of the known Biblical world.

The text examines the relationship between personal crisis and mission effectiveness of the Early Church. Repentance, forgiveness of sins and salvation were represented as personal crisis in the message of the early church, which was focused on the immediate conversion of the human soul. Such focus on the individual experience of the believer remains a focal point for the Biblical paradigm of missions. Unfortunately, this focus was lost as the church took a more non-crisis model of personal transformation in the centuries to follow. This brings the research to its second major part, which is an overview of the church history beyond the third century.

The book continues with a historical overview of church history in six epochs. The focus remains on the theology of missions and its transformation, since the beginning of this part of the research deals with the Eastern Church and culture after the Edict of Constantine. Bosch claims that the church was not a bearer of culture until put in a context of Empirial religious organization which actually was a merger between state and church. Elements of primitive eschatology virtually disappeared from the church. Moving toward the apologetics period of church history, the author properly notes the change within the eschatological view of the church form eminent-apocalyptic return of Christ to a kingdom-on-earth mentality.

The foundation of this trend is in the exchange of a crisis-repentance experience with the gradual spiritual elevation of the human soul (pneumatikoi). This idea stayed strong within the church through the next centuries of history and produced definite religious movements toward indulgencies as early as the Martyrdom of Polycarp where we read about “purchasing at the cost of one hour release from eternal punishment.” It is understandable that in such context missions receive a much different outlook. The medieval ages confirmed the indulgency practices with such vigor that they became a prime mission focus. Their influence was so strong that even after the Protestant Reformation had long-dealt with indulgent practices, mission was hard to fit in the paradigm of the church. Bosch confirms that it was not until the Wake of the Enlightenment that missions received the attention which they deserved in a church context. However, his overview of that era is quickly passed through modernity and is contradicted with the entering of postmodernity and its effect on modern-day culture. This is followed by an in-depth study of the elements of mission and their present-day application in various mission paradigms and concludes with a rather ecumenical model of missions.

Mission Applications: Mission to Post Communist Communities
In a transformation from post communism to postmodernism, the role of the church is definite. The church is a spiritual agent in transforming cultural. Our ministry in Bulgaria for the past 15 years has followed this mission model in the establishment and development of a network with over 15 churches. This process has been accompanied by definite vision expectations and strong leadership training, which have become the plus-side of our ministry in the Bulgarian context of constant insecurity. Our ministry team has benefited from the implementation of David J. Hesselgrave from Planting Churches Cross-Culturally following the “Pauline Cycle of Missions” (Table 1):

In the general Bulgarian context, there are claims today that the Bulgarian Pentecostals have pessimistic eschatology which doesn’t allow them to envision their ministry as a transformation of society. Such accusations come from small “reformed” groups who regardless of a limited presence during the years of the Communist Regime and virtually no mission attempts toward Bulgaria today claim to be the historical heritage of the Bulgarian Protestantism. Their main concern is that Pentecostalism, as the largest wing of the Bulgarian Protestantism, has pessimistic eschatology and no social or cultural attempt to transform Bulgaria because of the lack of a plan for economical transformation and participation politics.

This, however, is hardly the case, since the Bulgarian Pentecostal movement has gained a significant level of influence within the Bulgarian community in the past 15 years. Although representing roughly 1% of the Bulgarian population with a little over 100,000 member’s the Pentecostal movement has been present in the political life of the country with National Assemblies representatives and a political party (Bulgarian Christian Coalition) established in 1997. The government connection has continued with the numerous times Pentecostal churches and leaders have used their connection outside Bulgaria to assist with social challenges with social groups like disabled, orphans and retired. The social work of the Pentecostal moment has become well known throughout the Bulgarian towns and villages, as Pentecostal social centers are often the last and only resort for those social groups. The Pentecostal efforts toward social centers have inevitably assisted the Bulgarian economy in the area of social work which are now untouchable due to the severe economical crises which followed the fall of Communism.

Other minority groups have also been touched by Pentecostal ministry as the largest Gipsy Christian churches in Europe are only in Bulgaria. Women in ministry have been a constant phenomenon within Bulgarian Pentecostalism ever since its beginnings in the 1920s. The Bulgarian Pentecostals have always stood against racial and ethnical discrimination against Gypsies, Jews, Pomaks, and immigrants. Christian television, radio and other media in major cities are all initiated by Pentecostals who are responsible for the survival, rediscovery and reclaiming of the true Bulgarian Protestant identity. The 1990 Pentecostal revival in Bulgaria went well beyond the boundaries of social transformation and is playing a major role in the democratization of Bulgaria.